The Conference of European Churches (CEC) has just issued a press release on the situation of migrants seeking to reach Europe. I am posting the full release below. There are some requests of the Churches in particular which I have emboldened. 21 June is a day recommended for us to focus our prayers in particular.

The CEC is a fellowship of some 114 Orthodox, Protestant, Anglican and Old Catholic Churches from all countries of Europe, plus 40 national council of churches and organisations in partnership. CEC was founded in 1959.

Statement on external borders of the EU especially the Mediterranean

The Conference of European Churches (CEC) expresses its deep concern about the repeated loss of life in the Mediterranean. CEC deplores that for over two decades tens of thousands of migrants have drowned in their attempts to reach safety or find a more dignified life in Europe.

Conflicts on the doorsteps of Europe have led to ever more migrants fleeing within and beyond their region. Many are trying to cross the Mediterranean to Italy or Malta, others climb barbed wire border fences in Ceuta in Melilla or cross to the Greek Aegean islands or Cyprus. Less known are flight routes across Eastern external borders of Europe, but observations from the field suggest that human suffering and death might also be a reality here.

Smugglers are able to carry out their shameful lucrative business thanks to European migration policies. These policies, make it practically impossible to come legally to Europe even for those in the greatest need of protection.

Political reactions to the crisis have often focussed on stopping people rather than prioritising rescue of life.

Using military means to stop irregular migration is presented as a priority in EU documents. Little has been proposed by policy makers to allow for regular and safe migration.. Reception and welcoming of those who arrive in Europe is still a task left to a few European states.

At the same time churches and civil society organisations have in many places mobilised remarkable support for those arriving on European shores. They are extending welcome on the island of Lampedusa, giving legal advice on Greek islands, offer church sanctuary in Germany or housing in Sweden, and in many places shelter those having survived dangerous journeys.

CEC recognises that ending the unacceptable and shameful situation of deaths at EU borders will require a multifaceted response and include short-and long-term measures. The most desirable situation would be that no one is forced to leave their home country.

CEC therefore wishes to reiterate its message of December 2014 (http://www.ceceurope.org/index.php?id=1774) on the situation in the Middle East and commends the peace-building efforts undertaken in the region.  CEC also welcomes further efforts which would reduce harmful effect of EU policies on arms or on trade, for livelihoods in other regions of the world.

CEC is however mindful that seeking protection in another country or even another part of the world will be a necessity for many people for the foreseeable future. CEC therefore urges: 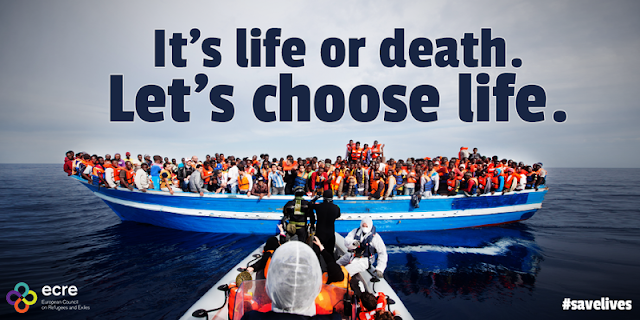 Posted by David Hamid at 14:43
Email ThisBlogThis!Share to TwitterShare to FacebookShare to Pinterest