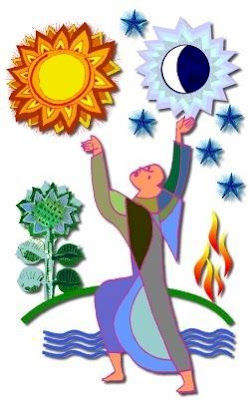 Faith leaders in Britain and Ireland have have pledged to fast and pray for the success of key international negotiations over climate change in a new declaration warning of the challenges facing the world over global warming. They released today a declaration on climate change which I post below.

Today is also the eve, of course, of a much anticipated Papal Encyclical on this subject which will be published tomorrow, 18 June. The Papal Encyclical is entitled Laudato Sii, or “Praised be”, from words used by St Francis of Assisi in a canticle in which he praises "Brother Son","Sister Moon", "Brother Wind" and "Sister Water".

The canticle can be found in our Church of England Common Worship: Daily Prayer as canticle 84 on page 641. Perhaps it could be prayed daily between now and the Climate Summit in Paris in December. Many may also know a hymn version "All Creatures of Our God and King".

The text of the Lambeth Declaration is below:

As leaders of the faith communities we recognise the urgent need for action on climate change.

From the perspective of our different faiths we see the earth as a beautiful gift. We are all called to care for the earth and have a responsibility to live creatively and sustainably in a world of finite resources.

Climate change is already disproportionately affecting the poorest in the world. The demands of justice as well as of creation require the nations of the world urgently to limit the global rise in average temperatures to a maximum of 2 degrees C, as agreed by the United Nations in Cancun. We have a responsibility to act now, for ourselves, our neighbours and for future generations.

The scale of change needed to make the transition to a low carbon economy is considerable and the task urgent. We need to apply the best of our intellectual, economic and political resources. Spirituality is a powerful agent of change. Faith has a crucial role to play in resourcing both individual and collective change.

We call on our faith communities to:


As representatives of the vast numbers of people of faith across the globe we urge our Government to use their influence to achieve a legally-binding commitment at the international Climate Change talks in Paris, and with the continuing programme beyond.  Through our various traditions we bring our prayers for the success of the negotiations.

We call with humility, with a determination enlivened by our faith and with awareness of the need for courage, justice and hope.  We are faced with a huge challenge. But we are hopeful that the necessary changes can be made - for the sake of all who share this world today - and those who will share it tomorrow.

Signatories to the Lambeth Declaration 2015 include:

Posted by David Hamid at 08:26
Email ThisBlogThis!Share to TwitterShare to FacebookShare to Pinterest