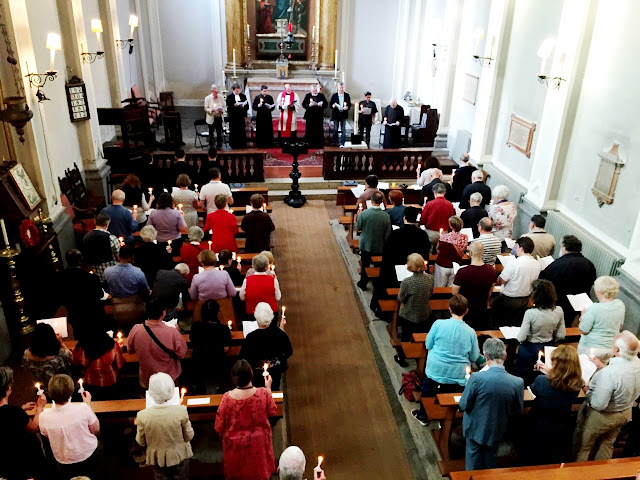 ‘Rejoicing in the work of the Spirit’ was the theme of an ecumenical service compiled and hosted by St George’s Anglican Church in Venice. It was held in the evening of Thursday 24th May to mark the 25th anniversary of the founding of the ‘Council of Churches in Venice’.

The service took the form of a Liturgy of the Word, including the reading the Pentecost narrative in a variety of languages. Other elements of the liturgy came from the rich and varied traditions of the Christian Churches, in several languages. For example, the service included a Pentecost Troparion (liturgical hymn) from the Romanian Orthodox Church, Taize chants, Veni Creator Spiritus sung in Latin, Agios O Theos of the Greek tradition and Church of England material for Pentecost from Common Worship: Times and Seasons. 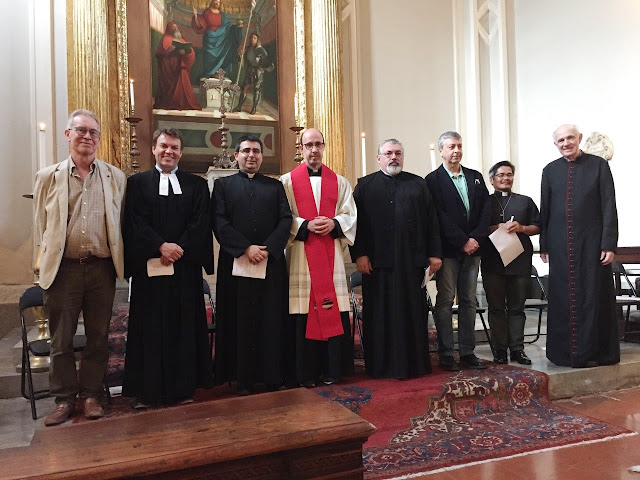 The priest of the Roman Catholic parish in which St George’s is located was invited to preside. He was supported by the pastor of the German Lutheran Church, the Ecumenical Secretary for the (RC) Patriarch of Venice, the parish priest of the Romanian Orthodox Church (preacher for the occasion), the lay leader of the Waldensian Church (who led the Peace and the Commitment parts of the liturgy), the priest for the Charismatic Episcopal Church (ICCEC) in Venice and the Churchwarden and Chaplain of St Georges.

Sadly, some of the committed members of the Council, such as the Coptic Orthodox Church, the Adventists and the Greek Orthodox Church, had to send their regrets to this occasion, but nevertheless, about 100 people attended. A much appreciated anniversary cake was prepared and donated by the local Charismatic Episcopal Church – a Filipino congregation.

Photos courtesy of Paula Rudinoff
Posted by David Hamid at 16:33
Email ThisBlogThis!Share to TwitterShare to FacebookShare to Pinterest