CEC Assembly: Called to One Hope in Christ 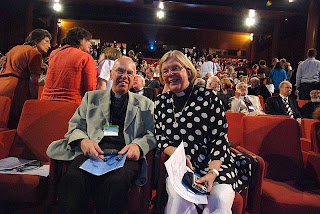 rches and 43 associated organisations from many countries on the European continent. From 15th to 21st July this year the 13th Assembly since the founding of the Conference in 1959 brought together over 300 delegates, advisers, observers and visitors from 126 Orthodox, Protestant, Anglican and Old Catholic member Churches to celebrate the jubilee year under the theme ‘Called to One Hope in Christ’. The Church of England is a member Church and sent a delegation headed by the Bishop of London. Due to the way the General Synod nominations committee works, the Diocese in Europe did not have a member on the delegation from the Church of England. However, our Anglican parish in Lyon was active among the host Churches, and an ordinand from the diocese, and member of the Chemin Neuf Community in Lyon, Mr Tim Watson, was also involved. The General Secretary of CEC is the Venerable Colin Williams, a Church of England priest, who has permission to officiate in Holy Trinity Church in Geneva, the city where the CEC offices are located. (Archdeacon Williams is pictured above, with the Very Revd Margarethe Isberg, the Dean of the Cathedral in Västeräs, Sweden and a former deputy vice-president of the Conference).

During the celebrations of CEC’s 50th anniversary, representatives discussed the

achievements and failures of the past six years since Trondheim, the venue of the last Assembly, the fusion between CEC and the Churches Commission for Migrants in Europe and the financial crisis. Assembly worship was according to the different forms and traditions of member Churches. The final message is addressed to member Churches and underlines many themes that touch upon the life and mission of congregations in this diocese, such as the unity of Christians, concern for the environment, work with migrant populations and building a welcoming and inclusive Europe. The message from the 13th Assembly to the Churches can be found here.
Posted by David Hamid at 22:19
Email ThisBlogThis!Share to TwitterShare to FacebookShare to Pinterest