Mary: Grace and Hope in Christ 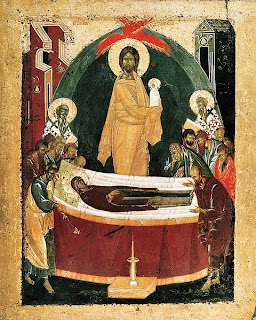 Today is the feast of the Blessed Virgin Mary. 15 August has been celebrated by Christians as the principle Marian festival from about the 5th Century. For Eastern Christians today is the Dormition of Our Lady. Similarly in the Book of Common Prayer of many Provinces of the Communion, such as the Anglican Church of Canada and the Scottish Episcopal Church, today is the Falling Asleep of the BVM. Roman Catholics call today the Assumption of the BVM. (The neutral Church of England title was chosen to avoid doctrinal controversy).
In 2005 the Anglican-Roman Catholic International Commission (ARCIC) agreed statement, Mary: Grace and Hope in Christ, was published. It reflects on what we can say in common about Our Lady. While it acknowledges difficulties that particular Papal definitions of Marian dogma can cause for Anglicans, it finds in Scripture and in the ancient common traditions the possibility of articulating a common faith about Mary which suggests that past differences may not now be communion dividing. For instance, the Assumption of Mary can be understood as a sign of our destiny in Christ. When Christians, ponder our participation in the full glory of our Lord (cf 2 Corinthians 3.18) we can see in Mary a sign of that ultimate hope. "Those whom God predestined he also called; and those who he called he also justified; and those whom he justified he also glorified", Romans 8.30. Through grace, all who faithfully follow God's purposes are welcomed into the presence of God at the end of their lives. Mary, is the one who bore God incarnate in her womb, and is thus the one among all believers who is closest to our Lord and Saviour. She is the pattern of our hope in Christ and shows us the ultimate glory of our rebirth in him.

The icon above is Russian from the 14th century. It depicts the Risen Lord holding Mary's soul at the moment of her death; he holds her as if she were a newborn child.

As a former Anglican Co-Secretary of ARCIC for 7 years, I suppose I am not entirely unbiased in recommending the text Mary: Grace and Hope in Christ for reflection! It is available here as a PDF download.

Congregations in the diocese dedicated to St Mary include Haarlem (St Anna and St Mary), Rotterdam, and Belgrade.

Posted by David Hamid at 09:12
Email ThisBlogThis!Share to TwitterShare to FacebookShare to Pinterest