Visit to the Serbian Orthodox Patriarchate 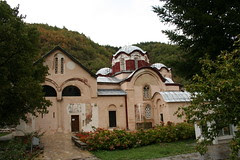 On 27 July, at the end of my recent parish visit to St Mary’s Belgrade, I paid a courtesy visit to the Patriarchate to pass along the greetings and the assurance of the prayers of the Archbishop of Canterbury. His Grace Bishop Atanasije of Hvosno and Deacon Alexander Sekulić welcomed me on behalf of His Eminence Metropolitan Amfilohije of Montenegro and Littoral and His Holiness Patriarch Pavle. (The Patriarch is seriously ill and should be remembered in our prayers).
As often happens when I meet ecumenical partners these days, there was some discussion about the present state of the Anglican Communion and about the Archbishop’s role in maintaining unity. The Serbian Orthodox authorities shared their concern, even sadness, at developments in our Communion. I found that they have an appreciation and understanding of the complex and difficult role of Archbishop Rowan Williams in trying

Image by Getty Images via Daylife

to maintain Anglican unity.
We spent some time discussing the situation of Kosovo Metohija. I heard an urgent plea for wider international recognition of the plight of the Serbian community and the Serbian Church in Kosovo Metohija. We spoke about how Christian Churches might raise some voice of concern for the future of the Church in Kosovo and Metohija including the preservation of Serbian monasteries, churches and cultural heritage sites there.
I was moved by the expression of appreciation for our Anglican-Serbian Orthodox bilateral relations. Our own priest in Belgrade, the Revd Robin Fox, is the Archbishop of Canterbury's Apokrisiarios (rather like an ambassador) to the Patriarchate of Serbia and works hard to keep our links active.

Posted by David Hamid at 20:03
Email ThisBlogThis!Share to TwitterShare to FacebookShare to Pinterest