Some Christians are hesitant about liturgical worship. Of course, virtually all Christians have a liturgy. Even a service in the Free Church tradition generally has a form to it: it usually includes a greeting at the beginning, an act of penitence, readings from scripture, hymns or songs, prayers for those in need, as well as sacramental acts. The only Christian tradition I know of which has absolutely no structure to their worship is the Quaker – where all gather and await in silence until someone is moved to speak!
So the question about liturgy is not really about whether to have one or not, but which liturgical form to use. Worship is the deep response of the redeemed humanity to God. Liturgy is the pattern or way that the people of God together offer that response. It is more than texts, although these are important. It includes movement, music, silence, and very often a sense of “sacred space”. Christian worship, through its liturgy, is the way that the Good News of Christ is recalled, celebrated and transmitted from one generation to another. The liturgy of the Lord’s Supper, or Holy Communion, for instance, is the way that the memory of Christ’s sacrifice is made present. St Paul mentions in 1 Co r 11.23 how he received this tradition and passed it down to his Corinthian congregation.
If you look at any of the Common Worship resources you will see that each service has an outline which indicates the basic form and the elements that should be there. F 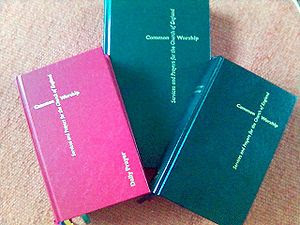 or instance a service of the Word has the following structure:
Greeting
Penitential prayers
Collect (prayer of the day)
Reading(s) from Holy Scripture
Sermon
Creed
Intercessions and thanksgivings
The Lord’s Prayer
Blessing or dismissal
There is an important reason for certain specific texts to have a place in worship, for instance, a set Eucharistic Prayer, because there is a connection between liturgy and doctrine. The way we pray must be coherent with what we believe. Authorized liturgical texts give assurance of this. We certainly do not want the Church’s worship to be a slave to a written text. Neither is the Church’s worship uniform. There is a wide range of authorized texts in the Church of England which means that the Church’s worship can be true to our faith while reflecting local custom, preference, style and creative expression. Certain texts are standard the Lord’s Prayer and the Eucharistic Prayers for instance. The Eucharistic Prayer must be one of the authorised texts as this prayer summarises the heart of our faith, and in that sense is creedal in nature. It proclaims the heart of the mystery of our redemption and so it must conform to doctrinal standards. Also, the eucharist is the time when we are joined to all other Christians, so the central prayer should be one that embraces the faith of all Christians.
But there is considerable freedom, within the general pattern for the other elements of worship. I have worshipped in Anglican congregations in Burma where the congregation all remove their shoes before entering the worship space to acknowledge God’s holiness; in Kenya and Canada where the congregation turn to face the four directions of the world to acknowledge God’s omnipresence; in India where the congregation sits on the floor around the cup and plate which are on a cloth on the floor (as a meal would be in one of their homes). I have heard hymns and songs accompanied by drums, flutes, sitars, pipe organs or no instrument at all. There is great variety of contextual and cultural expression possible, but the liturgical forms help us to recognize that it is the worship of the One Church of God that is being offered.
Of course the Church’s worship should always be of the highest quality – well prepared and inspiring to her members and attractive to seekers and newcomers to the faith. It should be true to what we believe and to what the Church has always believed, and not simply left to an individual’s notion of what is the Church’s faith. One of the responsibilities of the bishop is to ensure that the people of God are offering what is worthy and faithful to the Gospel.

Posted by David Hamid at 19:28
Email ThisBlogThis!Share to TwitterShare to FacebookShare to Pinterest