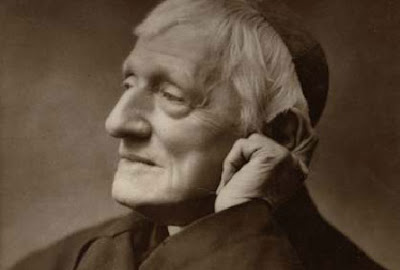 It has been confirmed by the Vatican that Pope Benedict XVI will visit Britain this year from 16 to 19 September. Today, Tuesday 16th Lambeth Palace issued this Press Release:

The Archbishop of Canterbury today welcomed the official announcement that His Holiness Pope Benedict XVI is to visit the UK in September at the invitation of Her Majesty The Queen: “The Pope's visit will be an opportunity to cement ties not only between the Holy See and the United Kingdom but also the Roman Catholic Church and other Christian churches in Scotland, England and Wales. I look forward particularly to welcoming Pope Benedict to Lambeth Palace on behalf of the Church of England.”

Readers will note in the Lambeth Palace release that this is state visit, not a pastoral one, even if such a distinction cannot be too sharply drawn for the Pope who is both a head of state and a pastor.

The beatification of John Henry Newman (pictured above) will be a high point of the Pope’s visit, on Sunday 19th September. Newman, a leader of the Oxford Movement in the 19th century, converted from the Church of England to the Roman Catholic Church in 1845. His beatification by a Pope, in England, will be an event requiring some sensitive ecumenical handling, especially in the light of last October's publication by the Vatican of the Apostolic Constitution Anglicanorum coetibus, a legal provision for former Anglicans to enter into the Roman Catholic Church while keeping elements of their own identity.

In this context it is helpful to know that the (RC) Archbishop of Westminster, Vincent Nichols, has recently affirmed that the “close cooperation and deepening friendship and communion" between Anglicans and Catholics have "helped us to ensure that the various interpretations of and reactions to Anglicanorum coetibus have not seriously disrupted the relationships between our Ecclesial Communions". Archbishop Nichols stated "the commitment to commence a third round of discussions as part of the work of the Anglican Roman Catholic International Commission [ARCIC] has reinforced this relationship".
Posted by David Hamid at 13:38
Email ThisBlogThis!Share to TwitterShare to FacebookShare to Pinterest