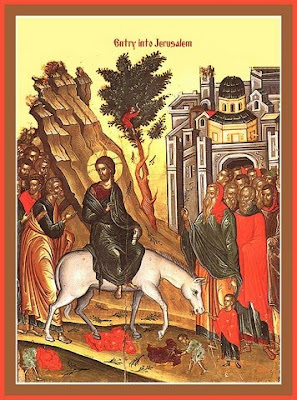 The Sunday before Easter is known as Palm Sunday. The Church celebrates the Lord's messianic entrance to Jerusalem where he enters the mystery of his death and resurrection. It begins the week called Holy Week. The liturgical colour changes from violet to red to mark the commemoration of our Lord’s passion.

St George's College, the Anglican study centre in Jerusalem, in one of their circular letters pointed out that to understand Palm Sunday one must understand the distinction made in the Scriptures between the olive branch and the palm branch. (Only in St John's Gospel are the branches named to be palm branches, the other three Evangelists speak only of branches).

Marcus Borg and Dominic Crossan in their 2006 book The Last Week suggest that there would be two processions on their way to Jerusalem during the Passover. The "imperial procession" would come from the west, perhaps from Caesarea Maritima, with the emperor's representative, Pilate, coming to keep the peace in Jerusalem. It was the one time of the year that Rome felt it necessary to impose its pax on the Jewish capital. From Roman coins we know that the governor would have been carrying a palm branch, a sign of imperial power. Meanwhile the Jesus procession came from the east. As he made his way along the Mount of Olives, the crowd cut leafy branches (olive branches?) and waved them as they hailed him.

There are many such contrasts associated with this day and even in the liturgy itself our cries range from “hosanna” to “crucify him”.

This ancient hymn from the Orthodox Church, sung on Palm Sunday, speaks poetically of this contrast:

Mounted on the throne in heaven, Christ God,
And on the colt on earth,
You accepted the praise of the Angels
And the hymn of the Children
Who cried to you:
Blessed are you, who come to call back Adam.

As we accompany our Saviour as he enters the Holy City we pray that we may have the grace to follow him to the cross, so that we might participate in his resurrection.
Posted by David Hamid at 08:21
Email ThisBlogThis!Share to TwitterShare to FacebookShare to Pinterest