The Work of a Reader in Antwerp 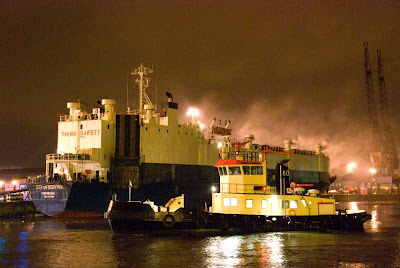 Photo courtesy Rémy Catoir
On 3 December 2009 a fire started in the engine room of the cargo vessel City of Berytus while it was berthed in the port of Antwerp. The fire spread quickly to the car deck on the Dominica-registered ship. The entire crew were evacuated and Port Chaplain John Attenborough was on hand to attend to their needs. John is a reader of the diocese, attached to St Boniface Church in Antwerp, and the official Mission to Seafarers (MtS) chaplain in the port.

John’s pastoral care of the 16 crew, who had to leave the ship with only the clothes on their back, was praised by the Revd Tom Heffer, the Secretary General of the MtS.


“I am full of admiration for the efforts that John Attenborough and his team have done in supporting the crew of the City of Berytus. The work of the Society is often quietly performed, but when emergencies happen, our chaplains are ready to step up and meet the need as required”.

The MtS is one of the mission agencies with whom we work very closely in this diocese. It works in more than 230 ports caring for the practical and spiritual welfare of seafarers of all nationalities and faiths. Over 1,000,000 seafarers around the world are ministered to each year by the agency. The website of MtS is here.
Posted by David Hamid at 06:00
Email ThisBlogThis!Share to TwitterShare to FacebookShare to Pinterest