The Anglican Peace and Justice Network Meeting in Geneva 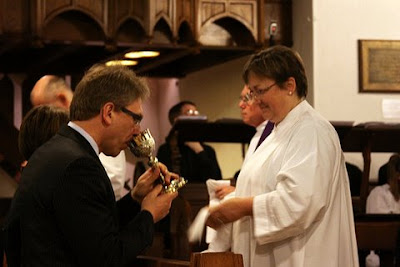 The following is an extract of a report written by Claudine Haenni Dale, the Anglican Communion's Main Representative to the UN in Geneva, about the Anglican Peace and Justice Network (APJN) meeting which was held in our diocese a couple of weeks ago. APJN is one of the most important networks of our Communion. Networks, unlike commissions of the Communion, have to be self-funded. Nevertheless, this particular one focusses on matters which are close to the heart of the Church's mission to the poor and marginalised.

The parish of Holy Trinity Geneva, where Claudine is a member (and trainee reader) played a major role in hosting the event and welcoming the international delegates to Geneva, who, from the report, clearly felt at home with us. It is a privilege that the APJN met in our diocese and we are pleased indeed that Claudine is closely connected with its work. She is pictured above administering Holy Communion to the Revd Dr Olav Fykse Tveit, the General Secretary of the World Council of Churches.


The Anglican Peace and Justice Network (APJN) met in Geneva from March 14th to 20th. Over 38 participants came from all over the Anglican Communion, from the Solomon Islands to El Salvador, covering over 25 churches or provinces. Several networks such as the International Anglican Women’s Network, the Family Network, the Refugees and Migrants Network, the Indigenous Network and the Health Network were represented as well as the Old Catholic Church.

The discussions covered a wide range of human rights and humanitarian topics, such as transitional justice and reconciliation, birth registration and the human rights of migrant workers, as well as forced displacement, women and health and human rights of indigenous people. Presenters came from UN agencies, international non-governmental organisations and faith-based organisations working on the different issues. The participants had the opportunity to visit the World Council of Churches and to meet with members of staff, as well as with Revd Dr Olaf Fykse Tveit. They also observed a session of the Human Rights Council, which is currently meeting, and visited the Palais des Nations.

On Sunday 14th, a magnificent Opening Eucharist was held at Holy Trinity and presided by the Revd Canon Kenneth Kearon, the Secretary General of the Anglican Communion. Other participants were the Revd Dr Olaf Fykse Tveit, General Secretary of World Council of Churches, the Revd John Beach from Emmanuel Church (the US parish) and the Revd Michael Wallace from St Germain Old Catholic Church. Dr Jenny Te Paa, a distinguished theologian from New Zealand and the APJN Convenor preached.

Three of the four Holy Trinity Choirs participated, with an anthem sung by the regular choir and one by Trinity Voices. Finally, there was a light supper in the parish hall which gave the congregation members an opportunity to meet and mingle with the APJN participants.

Throughout the week, the participants reflected on scripture and the topics of the day, held either morning prayer or a Communion service, and were hosted for evening meals in turn by Emmanuel Church, by Holy Trinity after a moving Sung Evensong, and by La Côte and Divonne congregations. Coffee and cake were provided by members of all three congregations as well.

The meeting officially closed on Friday 19th, with a long wish list of tasks for the Anglican UN Office in Geneva and a large vote of thanks for the hospitality offered by all three congregations. A communiqué was agreed on and will be released by the Anglican Communion News service.

Participants commented over and over again how welcome they had felt at Holy Trinity and how nice it was to meet people from their own churches, now living in Geneva. As someone stated : « Holy Trinity is almost like a home from home. »….

On Saturday 20th, Valerie Offord from Holy Trinity took some twenty participants on a tour through the old town of Geneva on Saturday, for an excursion and history lesson on the Reformation that was greatly appreciated by all.

Many thanks to all the people who prayed, cooked, baked, served, played, sung and participated, making this an unforgettable event for the APJN members and the other network representatives and observers

Posted by David Hamid at 18:49
Email ThisBlogThis!Share to TwitterShare to FacebookShare to Pinterest