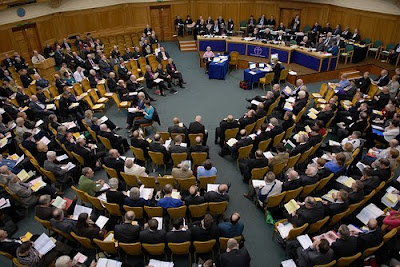 Photo credit: Mzzur/catholicchurch.org.uk
The Church of England launched a campaign today to encourage "people with a very big heart" to stand for election.to the General Synod. The present Synod will be dissolved at the end of the July 2010 group of sessions in York and a new Synod will be elected for a five-year term in September/October and inaugurated in November.  There are 378 lay and clergy members, plus the house of bishops. The Diocese in Europe has two clergy and two lay members as well as Bishop Geoffrey. Our present members are the Revd Canon Debbie Flach, the Very Revd Jonathan Boardman, (Lay) Canon Ann Turner and Mr Roger Fry.

Resources have been produced, under the slogan "Be Part of the Big Picture", for those who may be interested in standing for election. Included is a five-minute video filmed at General Synod in February 2010, featuring contributions from the Archbishops of Canterbury and York, Business Committee chair Preb Kay Garlick, outgoing members of the Houses of Laity and Clergy, and national journalists. The video can be viewed here. Other resources and vital information for those considering standing for election can be found here.

The Archbishop of Canterbury, Dr Rowan Williams, says on the video: “Any healthy and mature Church is a Church where everyone feels they have a voice. Synod needs your voice because we need all the voices together to discover the truth that God wants us to know for our generation, society, sanctification, our own hope and our own health.”

The Archbishop of York, Dr John Sentamu, adds: “We want people whom I call all-weather Christians - people who are all-rounders really that can actually play the different jobs, because there are people sitting on committees, different boards and councils. So what we want are people who have a very big heart, who want to come here and bring friendship, bring love, bring vitality, and we want all ages.”

The requirements for election to the Houses of Laity and Clergy respectively are as follows:


David Williams, Clerk to Synod, said: “The next few months will be a challenging yet rewarding time of circulating the information and then electing members reflecting the diversity of the Church for the new quinquennium. Nominations are particularly welcome from people of minority ethnic backgrounds as we move forwards into our Ninth General Synod.”
Specific information pertaining to elections in this diocese will be issued by the Diocesan Secretary in due course.
Posted by David Hamid at 00:07
Email ThisBlogThis!Share to TwitterShare to FacebookShare to Pinterest