The Archbishop of Canterbury's Easter Letter to Church Leaders 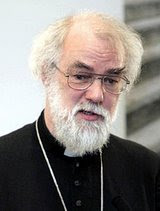 In his ecumenical Easter Letter to fellow church leaders, the Archbishop of Canterbury urges Christians living in relatively comfortable environments to offer practical support as well as prayers for the many suffering Christians around the world, particularly in Zimbabwe, Mosul (Iraq), Egypt and Nigeria. At the same time Archbishop Rowan reminds those of us who live in relative peace and security but who may be concerned about secularising trends in society that


“We need to keep our own fears in perspective. It is all too easy to become consumed with anxiety about the future of the Church and society. We need to need to witness boldly and clearly but not with anger or fear; we need to show that we believe what we say about the Lordship of the Risen Christ and his faithfulness to the world he came to redeem”

When St John tells us that the disciples met behind locked doors on the first Easter Day (John 20.19), he reminds us that being associated with Jesus Christ has never been easy or safe.  Today this is evident in a wide variety of situations – whether in the terrible communal violence afflicting parts of Nigeria, in the butchery and intimidation of Christians in Mosul in recent weeks, in the attacks on the Coptic faithful in Egypt, or in the continuing harassment of Anglican congregations in Zimbabwe.  As we mark the thirtieth anniversary of the martyrdom of Archbishop Oscar Romero in El Salvador, we acknowledge that Christians will never be safe in a world of injustice and mindless fear, because Christians will always stand, as did Archbishop Romero, for the hope of a different world, in which the powerful have to let go of privilege and rediscover themselves as servants, and the poor are lifted up into joy and liberty.

This hope is rooted in the resurrection of the Lord Jesus.  His rising from the dead shows the world that death does not have the last word – whether the death of love, the death of security, even physical death itself.  On the first day of the week, the first day of the new creation, God walks once again in the garden and begins to re-shape the whole world of our experience and our possibilities;  the Second Adam wakes under the tree of the cross and promises fresh life, freedom and forgiveness, to the entire human world.

Wherever fear prevails, this promise will be seen as dangerous.  But people still have the courage to identify themselves as Christians because they know that the resurrection demonstrates that Jesus is beyond all human power and violence, that ‘all authority in heaven and on earth’ is given to him (Matthew 28.18).  The Christian may suffer and die witnessing to this truth, but death itself cannot extinguish the abiding power of Christ to transform and renew;  the martyr knows this and fixes his or her eyes on that joyful vision.

We who live in more comfortable environments need to bear two things in mind.  One is that fellow-Christians under pressure, living daily with threats and murders, need our prayers and tangible support – by personal contact, by continually reminding our governments and media of these things.  To a Christian experiencing these threats, it matters more than most of us could imagine simply to know that they are not alone and not forgotten.  But the second point to remember is that we need to keep our own fears in perspective.  It is all too easy, even in comfortable and relatively peaceful societies, for us to become consumed with anxiety about the future of Church and society.  We need to witness boldly and clearly but not with anger and fear;  we need to show that we believe what we say about the Lordship of the Risen Christ and his faithfulness to the world he came to redeem.

The world will not be saved by fear, but by hope and joy.  The miracle of the joy shown by martyrs and confessors of the faith is one of the most compelling testimonies to the gospel of Jesus.  In whatever way we can, we must seek to communicate this joy, however dark or uncertain the sky seems.  All authority belongs to Jesus, and into his wounded hands is placed the future of all things in heaven and earth.  To him be glory for ever.

ENDS
Posted by David Hamid at 00:57
Email ThisBlogThis!Share to TwitterShare to FacebookShare to Pinterest