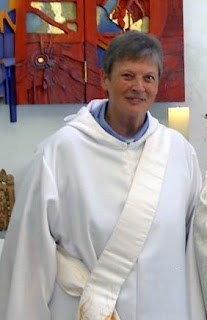 On Friday 9 April about 150 people crowded into St Andrew's in Fuengirola for a Memorial Eucharist for the Revd Dr Lindy Jordan. Deacon Lindy was the assistant curate in Costa del Sol East who died due to complications following surgery last 23 January.

The service was attended by Lindy's sister Dinah and by several of Lindy's colleagues among the clergy in Spain, including priests from the Finnish and Norwegian Churches, and the Revd Dr Ian McIntosh, the Principal of the Eastern Region Ministry Course, where Lindy trained for ordination.

Once, when preparing for her selection conference for ministry in the Church of England, Lindy was asked to state what she believed to be the heart of the Gospel. She said:

"Jesus's sacrifice opened up to us the eternal kingdom which is the object and hope of our journey."

May the Risen Lord bring Lindy to that eternal kingdom.
Posted by David Hamid at 23:57
Email ThisBlogThis!Share to TwitterShare to FacebookShare to Pinterest