The World Council of Churches General Secretary, Olav Fykse Tveit, has sent this Christmas message to the member Churches. The WCC brings together 349 churches in more than 110 countries and territories throughout the world, representing over 560 million Christians. It includes most of the world's Anglicans (including the Church of England), as well as most of the Old Catholic, Orthodox,  Baptist, Lutheran, Methodist and Reformed churches, as well as many Independent churches. The headquarters are in Geneva, within our diocese.


"For the grace of God that bringeth salvation
hath appeared to all". Titus 2:11, KJV

Grace to you and peace in the name of our Lord Jesus Christ. May the appearance of the gracious salvation of the Triune God enlighten our hearts, minds and spirits in this joyous season.


New Testament accounts of the advent and nativity of Jesus stress the all-encompassing nature of the Christ event. Without reservation, the Biblical text says that God’s grace appears to all, offering the promise of forgiveness, healing and reconciliation with God in heaven and with our neighbours on earth. The grace of God has appeared in the person of Jesus Christ. He appears for the sake of marginalized shepherds and their families in his homeland. He attracts the attention of well-to-do scholars in distant nations. He appears to Mary and Joseph as a gift of God’s mystery. Through these faithful witnesses, and the proclamation of good news down the ages, Jesus appears to us. We, too, are called to respond to his presence among us today.


In May 2011, one thousand people gathered in Jamaica under the theme, “Glory to God and Peace on Earth.” It is the heart of the Christmas message and gave heart to the International Ecumenical Peace Convocation (IEPC). This song of angels recorded in Luke called our attention to the need for Just Peace for all in the 21st century. Praying that the peace of God will appear to all, the message of the IEPC made this vow:

“With partners of other faiths, we have recognized that peace is a core value in all religions, and the promise of peace extends to all people regardless of their traditions and commitments. Through intensified inter-religious dialogue we seek common ground with all world religions.”

And the IEPC message offered this exhortation to Christians:

“We as churches are in a position to teach nonviolence to the powerful, if only we dare. For we are followers of one who came as a helpless infant, died on the Cross, told us to lay aside our swords, taught us to love our enemies and was resurrected from the dead.”

May the grace and peace of God appear to many more through this season of Christmas! On behalf of the World Council of Churches, I wish you well at the turning of this year, and I pray for God’s blessing on our common journey in the years to come. 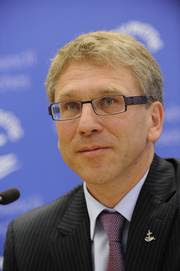 Posted by David Hamid at 08:52
Email ThisBlogThis!Share to TwitterShare to FacebookShare to Pinterest