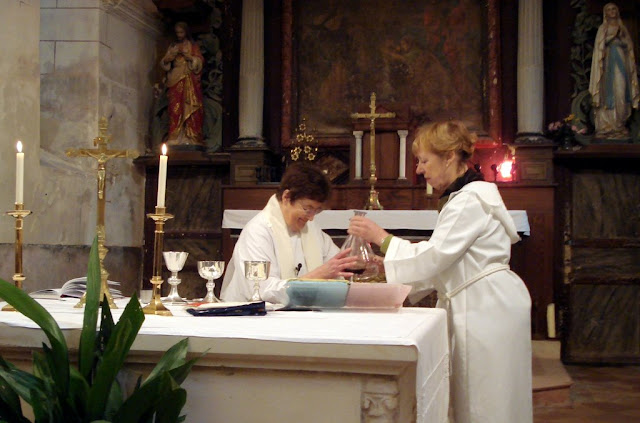 A week later than planned due to snow, on 25th January the Anglican parish of the Aquitaine gathered at Ste Catherines, Limeuil for a Service of Thanksgiving for the work and ministry of Revd Caroline Gordon-Walker, where she officiated at her last eucharist in the parish (pictured above), followed by a lunch punctuated by many who wanted to recall her time in the Dordogne.

Not long after coming to live in France in 1992, Caroline became a local Churchwarden. Aquitaine’s Chaplain, the Revd Paul Vrolijk said, ‘You have served in so many roles and have been active in so many ministries since then!   Caroline you have been part of so many groups.....and these last years as a member of the ministry team.  It was in times of personal tragedy that God awoke his calling on you to be ordained, and you went to train in Durham, you were ordained deacon by Bishop Geoffrey in 2002. Finally ordained a priest by Archbishop Rowan Williams in 2003 at Canterbury.’

The love that the people of Aquitaine have for Caroline was manifest in the work of two years of a wall hanging depicting the names of all who wish to be remembered by her, which was presented to her during the service (photo below).  The ‘bricks’ in the warm colours of flames depicting the Holy Spirit, were painted, stitched, embroidered, embellished and just plain written by members of the Aquitaine Chaplaincy (some 9 churches spread throughout the Dordogne and Lot et Garonne) and then finally assembled by two members of the design team.  The fabrics were donated by a member of the Bordeaux Church and came from the Amish Community in America.

Caroline’s ministry and work brought people together in love and humour to proclaim Christ’s love and the theme of the Thanksgiving Service was ‘living stones’.

As a bishop responsible for ecumenical relations in France, I have particularly appreciated Caroline's work in building and strengthening our good working relationships with the Roman Catholic clergy in the Aquitaine, whose buildings we use, thanks to the hospitality offered by the local bishops. Her ministry bears  testimony to the fact that women priests are not necessarily an impediment to fruitful ecumenical co-operation with the Roman Catholic Church.

We all wish Caroline a long and happy retirement as she joins her daughter and family in the UK. 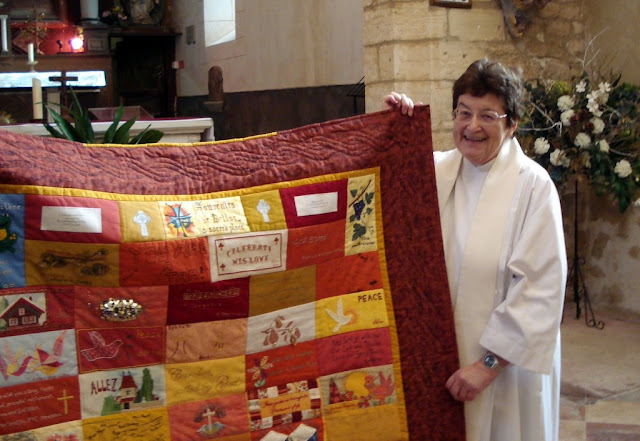 Posted by David Hamid at 20:28
Email ThisBlogThis!Share to TwitterShare to FacebookShare to Pinterest