Kirkevandringen - Walking Together for Christian Unity in Copenhagen 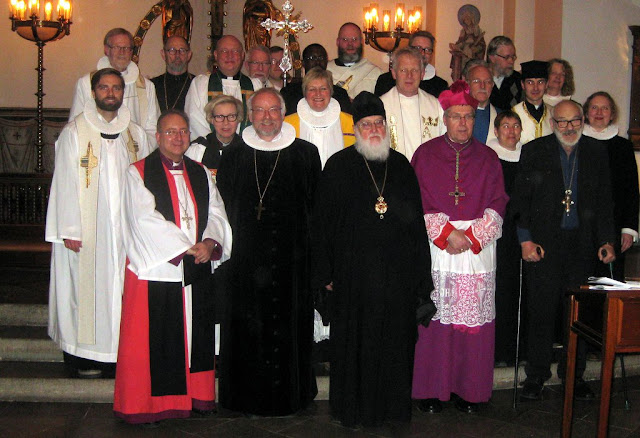 Kirkevandringen is the name of the event which churches in Copenhagen have celebrated for 59 years, during the Week of Prayer for Christian Unity.  If you think this word looks like it might mean “wandering around Churches” you are correct. It actually means a Church walk or hike, or in religious terms, pilgrimage.

By far the largest and most comprehensive gathering of Christians in the City each year, Kirkevandringen  takes the form of a service which is celebrated in 6 short liturgies in central Copenhagen Churches. Orthodox Metropolitan Kallistos Ware sent us on our way at the first service in St Paul’s Church of Denmark. The group then proceeded in pilgrimage, following a crucifer, to the Methodist Jerusalem Church, the Orthodox Church of St Alexander Nevsky, the Roman Catholic Cathedral of St Anskar, St Alban’s Church of England and ending up at the Swedish Gustaf Church. Brief liturgies were held in each place according to the tradition of that particular Church, providing a rich tapestry of Christian worship and prayer for the evening.

This year's  Kirkevandringen  held on Tuesday 22 January had four bishops, Lutheran, Anglican, Roman Catholic and Orthodox and dozens of clergy from the major denominations in the city taking part, along with about 700 people who walked the route on a sub-zero Copenhagen evening.

Anglicans play a key role in the Kirkevandringen.  Members of the choir of St Alban’s joined the Revd Canon Ulla Monberg in leading a shortened form of Evening Prayer. (Canon Monberg is a key organiser of the annual event with her ecumenical colleagues). Nigel Rowley a member of St Alban’s Parish and a member of our Diocesan Synod was one of the crucifers for the evening. At the final service in the Swedish Church I had the privilege of preached the homily on the theme for this year's Week of Prayer.

Posted by David Hamid at 10:41
Email ThisBlogThis!Share to TwitterShare to FacebookShare to Pinterest