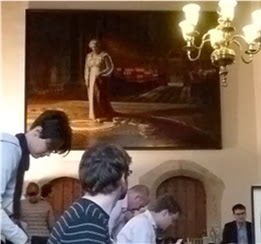 The Diocesan Director of Ordinands, (DDO), the Revd Canon William Gulliford, has recently sent me this report of an imporant event coordinated by the Ministry Team of the Diocese.

Under the portrait of Queen Elizabeth II, which hangs in Westminster Abbey’s meeting room in Cheneygates, 20 enquirers from across the Diocese in Europe gathered from 24-26 January to explore issues in vocation. Those that attended came from a range of backgrounds, but it was very striking that there were only 4 British people as part of the event. The Vocations Enquiry Weekend represents a starting point in the diocesan process of discernment and the process may not begin without attending it.

As well as all attending visiting one of four London parishes, a day was spent in the precincts of Westminster Abbey. This was a very special time of prayerful reflection. We were very grateful indeed to the Dean and Chapter for their hospitality to our group. The day included participating in Matins and Choral Evensong and having devotions at the Shrine of St Edward the Confessor.

Canon Andrew Hawken, Assistant Director of Ordinands, (ADO) for France, and the Revd Dr Sam van Leer, Vocations Adviser for North West Europe, joined Sonia Taylor Vocations Adviser for France, Deacon Frances Hiller and the DDO in accompanying the sessions. Bishop David chaired the first morning’s sessions which included a lecture by him on Ecclesiology, and then three people who have been through the diocesan process in recent years spoke of their experiences. These were the Revd Tasha Critchlow, the Revd Folli Olokose and Janneke Blokland.

The Vocations Enquiry Weekend takes place once a year, and for the last two years there has been a great deal of interest shown in the event.

Posted with Blogsy
Posted by David Hamid at 11:52
Email ThisBlogThis!Share to TwitterShare to FacebookShare to Pinterest