Archdeacon of Germany and Northern Europe in Oscar-winning film... 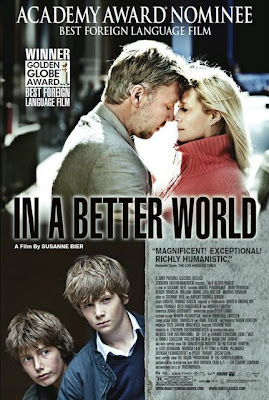 When Danish film director Susanne Bier called Archdeacon Jonathan LLoyd to ask whether she could film a funeral scene at St Alban's Church, Copenhagen, as part of her new movie, he at first said no. After reading the script, he changed his mind and agreed to meet the production crew. "I had never heard of Susanne Bier, having just arrived myself in Denmark. But the movie clearly has a strong ethical message of forgiveness, and so, after consulting my churchwardens, I agreed". The film "In a Better World" won the Oscar for Best Foreign Language Film at the 83rd Academcy Awards, announced Sunday in Los Angeles.

Fr Jonathan has a walk-on part in the film, acting as himself. The production team wanted to know the exact details of an English funeral compared to a Danish one. "In the end it got so complicated to explain, that I agreed to just do it myself.", explained Jonathan.

"We had about 20 takes, and my part was to walk up to the coffin and show the young boy who was reciting Hans Christian Andersen, back to his seat. I appear in the film for just a few seconds, and if you blink, not at all! I offered to give a short homily on the resurrection, but this was politely declined! It was great fun working with Susanna and her team, and I have invited her back to St Alban's in the summer to our public celebration of the King James Bible's 400th anniversary."

St Alban's Church appears in the credits, and the film has been distributed by Sony Pictures to 50 countries.

The Revd Canon Ulla Monberg, the Diocesan Director of Training and an assistant priest at St Alban's advised the production team on the etiquette of the refreshments following an English funeral.

The official site for the film is here. For a quick synopsis of the plot press read more.

The plot:
Anton (Mikael Persbrandt) is a doctor who commutes between his home in an idyllic town in Denmark, and his work in a Sudanese refugee camp. In these two very different worlds, he and his family are faced with conflicts that lead them to difficult choices between revenge and forgiveness. Anton and his wife Marianne (Trine Dyrholm), who have two young sons, are separated and struggling with the possibility of divorce. Their older, twelve-year-old son Elias (Markus Rygaard) is being bullied at school, until he is defended by Christian (William Jøhnk Nielsen), a new boy who has just moved from London with his father, Claus (Ulrich Thomsen). Christian's mother recently lost her battle with cancer, and Christian is greatly troubled by her death.

Elias and Christian quickly form a strong bond, but when Christian involves Elias in a dangerous act of revenge with potentially tragic consequences, their friendship is tested and lives are put in danger. Ultimately, it is their parents who are left to help them come to terms with the complexity of human emotions, pain and empathy.
Posted by David Hamid at 12:15
Email ThisBlogThis!Share to TwitterShare to FacebookShare to Pinterest