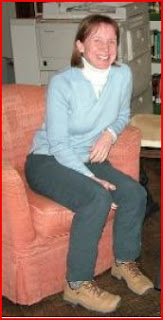 Mary Styles is an ordinand of the Diocese in Europe who lives in Rome and who is presently a licensed reader at All Saints Church there. In an article published in Centro, the bulletin of the Anglican Centre in Rome, Mary tells of her experience with a "Fresh Expression" and of her own connection with the Anglican Centre.

With permission from the Director of the Anglican Centre, the Very Revd David Richardson, I am pleased to publish the article below.

People sometimes enquire about "Fresh Expressions" in our diocese. Apart from the fact that in many ways the entire diocese is a "Fresh Expression", Mary's story of Footsteps is a good example of a particular way we can transcend more traditional, inherited ways of expressing the Church's life.


Follow the read more link for Mary's story of "Footsteps".


Footsteps, Rome, is a “Fresh Expression of Church”, a term that came to prominence following the Church of England's Mission-Shaped Church report of 2004 as a way of describing gathered communities of worshippers that meet outside or on the boundaries of what we might consider conventional church. Footsteps is just such a group here in Rome. Whilst there is a good choice of established churches in the city centre there was no opportunity for worship in English in the suburbs and beyond (from where it can take one to two hours to reach the centre). It is also notable that many who express an interest in learning more about the Christian faith or coming together to worship are either not interested in or disillusioned with “denominational” church. I have been leading this fresh expression of church for the past nine years. We meet in homes, as families and individuals, for informal interdenominational worship in English – to serve and reach out to our neighbours.

The English-speaking community is large here in Italy's capital city, which hosts three UN agency headquarters as well as many international companies. Hospitality, friendship and fellowship are the basis of our ministry. As a cosmopolitan group, understanding and celebrating other ways and cultures are hugely important. So we have much in common with the Anglican Centre in Rome (ACR). I am now an ordinand in the Church of England's diocese in Europe and have come to value even more the ministry of the ACR during my training and formation. I have been helped to understand the Anglican identity better whilst pursuing Christian unity with our ecumenical friends.

Leading Footsteps has been a delight but also a challenge and the staff at the ACR (amongst others) have provided the support and encouragement of those much more mature in the faith than myself. I have had the opportunity to get to grips with Anglican liturgy and ritual from around the world, but more than this the ACR is a place of refreshment where Christians listen to each other's stories and are welcomed and affirmed. A place that models Jesus command; “Love one another as I have loved you......by this everyone will know......” (John 13: 34-35).
Posted by David Hamid at 14:47
Email ThisBlogThis!Share to TwitterShare to FacebookShare to Pinterest