New head of the Vatican's ecumenical department becomes a cardinal 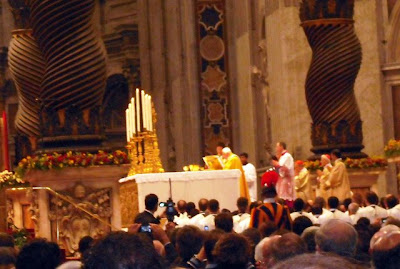 On Sunday 21 November, I was in St Peter's Basilica in Rome for the mass which celebrated the appointment of Kurt Koch as a cardinal, one of 24 new cardinals created by Pope Benedict XVI. Cardinal Koch is formerly the Bishop of Basel but now is the President of the Pontifical Council for the Promotion of Christian Unity (PCPCU). The PCPCU is the Vatican dicastery responsible for ecumenical dialogue including the official dialogue and relations between the Roman Catholic Church and the Anglican Communion. He takes over from Cardinal Walter Kasper who retired earlier this year.

Our official relations with the Roman Catholic Church continue to be very good. Indeed, the next phase of our international dialogue, ARCIC, is in final preparations. The membership of the new commission has been decided by both Anglican and Roman Catholic authorities and plans for the first plenary session are under way. This next phase of ARCIC will look at the question of the nature of the authority belonging to the local Church and its relation to the universal Church.

Anglican Communion officials, Secretary General  the Revd Canon Kenneth Kearon, Director of Unity, Faith and Order, the Revd Canon Alyson Barnett Cowan were also present for the mass for the new cardinals. Just before the Eucharist began, Canon Barnett Cowan received a message on her mobile telephone that her daughter-in-law had given birth to twins. It is almost certain that never before has a priest received news that she became a grandmother while waiting for a papal mass to begin in St Peter's basilica!

Canon Barnett Cowan is the Anglican Co-Secretary of ARCIC. She is pictured below on the left, with  Canon Kenneth Kearon. 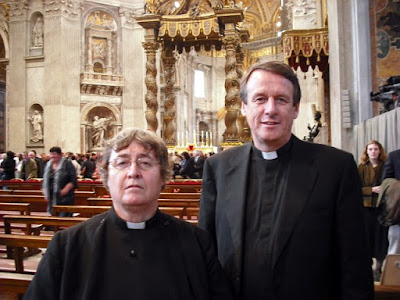 Posted by David Hamid at 12:43
Email ThisBlogThis!Share to TwitterShare to FacebookShare to Pinterest