Geneva in solidarity with Haitians as they “move forward in hope”

The faithful of the Diocese in Europe have been praying for the people of Haiti since last January's devastating earthquake. There has already been a very generous response to our appeal for the emergency relief efforts. (More about that in another article). Meanwhile, in Geneva, one of the cities in Europe where there is both a Church of England parish and a US Episcopal parish, the two Anglican congregations collaborated in an event at the end of October, in solidarity with their Haitian sisters and brothers. An old personal friend of mine, the Revd Canon Ogé Beauvoir, the Dean of the Episcopal Seminary in Port au Prince was an invited guest and witness. The report below was sent to me by Katie Foot in Geneva. 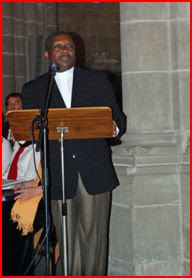 It started with a deafening drum roll “earthquake” and ended in joyful songs of praise. “Psalms for Haiti”, held in Geneva’s old town (Protestant) cathedral on Saturday 30 October, led more than 400 people in a moving exploration of past devastation, present recovery and future hope.

Speaking of his visit to Haiti just days after the earthquake last January, the General Secretary of the World Council of Churches, Revd Dr Olav Fykse Tveit, recalled seeing hopeless, “empty places” but also hopeful “people who cleared away stones and dust”. This hope was further attested to by Revd Canon Ogé Beauvoir (pictured left), who told of his fellow compatriots’ determination to “stand up and walk” in the face of adversity.

The event raised over 10,000 Swiss Francs to help rebuild the Episcopal Church of Haiti’s cathedral complex and adjacent schools. Canon Beauvoir said that the reconstruction of the cathedral complex had become a national symbol of resurrection. “Just as the cross is the way to the resurrection,” he said, “the rebuilding of the cathedral is a symbol of Haiti’s need for spiritual, mental and physical reconstruction”.

While Haiti continues to suffer – not least due to the recent outbreak of cholera and the 1.3 million people who are still living in makeshift camps – it is also looking to the future. The Church is committed to raising “the torch of hope for Haiti”.

The testimonies were framed by spoken and sung psalms set to traditional and contemporary music (by Arvo Pärt, Howells, Monteverdi, Brahms, Berkeley, and Bernstein) and dramatically performed by the combined choirs of Geneva’s Anglican and Episcopal churches, directed by Shauna Beesley (Episcopal) with Keith Dale (Anglican) at the organ. A song in Creole added a Haitian flavour to the evening’s meditations and prayers.
Posted by David Hamid at 00:17
Email ThisBlogThis!Share to TwitterShare to FacebookShare to Pinterest