Interview with the Diocesan Director of Ordinands 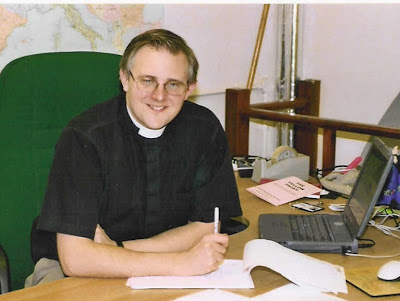 I have slightly edited the original interview but it is still longer than most posts on this blog, but press the read more button for the complete article.
How did you become the Diocesan Director of Ordinands?
I am not quite sure. As a priest I was looking for something a bit different at the time. One day I had a phone call from Bishop Geoffrey asking me if I would like to be the Diocesan Director of Ordinands, on a part-time basis. I was already vicar of St Dunstan’s in the City of London. The Bishop of London wanted St Dunstan’s to have a focus on Europe and had asked if I could be used in some of the work of the Diocese in Europe. St Dunstan’s already hosted a Romanian Orthodox congregation.

What do you enjoy about your work?
What interests me a lot besides meeting the people is being part of a diocese that is growing and exploring mission in a fascinating way. There is an ecumenical dimension. Each candidate represents a unique ecumenical context and often an ecumenical personal situation like me. I myself am living in an ecumenical situation. My wife is a Roman Catholic. It is a joy to see the vitality of Anglicanism in its least obvious setting – continental Europe. It shows me that the Church of England has a future. This is encouraging and upbuilding. It gives me heart!

What is the Church of England looking for in those who offer themselves for ministry?
First and foremost, to be honest, for the health and well being of the Church of England it is looking for young candidates. In the next 10 years 40 percent of the stipendiary clergy in England will retire. We simply don’t have enough candidates to fill the gaps. The average age of those being ordained to the stipendiary ministry presently is just over 40. Half of the present candidates are non-stipendiary. Being ordained late means that many simply do not have the experience needed to take on big parishes or a configuration of parishes.

Firstly, we are looking to recruit good people. Secondly, they should be theologically able regardless of age. Thirdly, they must be solid ambassadors for Christ. Fourthly, they must also reflect the diversity of the Church of England – women and men, married and single – and come from a variety of ethnic backgrounds.

What about the sense of vocation that a candidate should have?
A candidate’s sense of vocation works two ways. We balance the call of the individual with the call of the Church. There is a subtle difference. This balancing act relies on the process of discernment not being rushed – it takes time. Some helpful indicators for me in this process are: 1) Is the person acutely self aware before they talk about their vocation? 2) Can the candidate distinguish their journey of faith from their journey of vocation? Too often a candidate’s sense of identity as a Christian is bound up with being called to public ministry – that is not the place where an individual should start. Sometimes I spend a lot of time disentangling a candidate's appreciation of themselves from their faith and vocation. The people who often get most excited about the process and are most easily disappointed are unable to disentangle self, faith and vocation.

Can you give an example of a more unusual vocation?
The diocese will put itself out where a genuine vocation is discerned. This is not always easy in a diocese that includes parts of Asia and Africa! An unusual vocation for the C of E was that of the Revd Sampson Ajuka who was ordained to serve a congregation mainly made up of Nigerians in Padua. There we saw an emerging community. For ministry to flourish the right person has to be part of it. In Samson’s case a succession of locum priests pushed for him to be ordained. His ministry was also very much discerned by the laity in the Venice chaplaincy to which Padua belongs. These went hand in hand.

What happens when someone comes to you? What is your mindset?
I am an inquisitive person. I like to know what’s going on. I don’t jump to conclusions. See the person, be aware of their context and be aware of the individual’s motivations. Keep an open mind. I recommend that anyone embarking on the process of discernment needs to be accompanied by an individual who is outside the process, upheld throughout by prayer

Tell us a little about the nuts and bolts of your work?
I am looking after about 40 people at any given time. Some are already in training, some are at the diocesan level of discernment, and others are enquiring. The breakdown this year is 7 in training, 13 at the diocesan level of discernment and 20 enquirers. Once an ordinand finishes his or her training I help them to find a title post, a place they are ordained to and where they serve their curacy. Over the six years that I have been doing the job half the candidates have been women and half men. Of those ordinands one third is stipendiary and two thirds are non-stipendiary. For our ordinands it is commendable that they serve their curacy in England. This year a total of 570 people were ordained in the Church of England.

How does one distinguish between stipendiary and non-stipendiary?
The discernment process begins with the local priest before the candidate goes to see a diocesan based vocation’s advisor and I would hope that by the time they come to see me that this question has been explored. The candidate must have the local church’s endorsement. This is secured by a motion put to the church council and only then do I see the candidate for a long interview. Younger candidates are more likely to be stipendiary because they are more likely to be deployable. Older candidates are generally non-stipendiary. Some older candidates begin the process for non-stipendiary ministry in their late 40s. We would hope that in the main people were ordained by the age 55. Very exceptionally a person may be ordained at age 65.

Is there anything you would like to say in finishing?
One thing emerging in the diocese is a discussion about local language ministry. I do not have a particular view on this! But we are attracting more and more non-British theology graduates. There is a longing for what the Church of England represents in Continental Europe – a via media. People don’t like being trapped in the Catholic/Protestant divide. They appreciate a liturgy that goes beyond the doctrinal differences: a liturgy that reaches out, consolidates and embraces a variety of positions. Local language ministry is an open question, but one that needs addressing.
Posted by David Hamid at 01:02
Email ThisBlogThis!Share to TwitterShare to FacebookShare to Pinterest