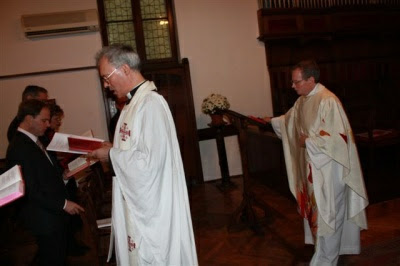 On 9 October the Revd Patrick Irwin (above left) was licensed as Chaplain of the Church of the Resurrection, Bucharest, Romania. The Archdeacon of the East, the Venerable Patrick Curran, (above right) presided at the service. Fr Irwin is also responsible for the Anglican congregation in Sofia, Bulgaria and has an important ecumenical role as the Archbishop of Canterbury's Apokrisiarios (legate or representative) to the Patriarchs of Romania and Bulgaria.

The service was attended by ambassadors from the UK, Ireland and the USA, as well as German Lutheran pastors, a representative of the Romanian Orthodox Patriarch and other Orthodox and Armenian Apostolic priests.

Fr Irwin comes to this diocese following a distinguished career as an army chaplain. Most recently he was the British chaplain at SHAPE (Supreme Headquarters Allied Powers Europe) in Mons, Belgium, the Headquarters of Allied Command Operations, one of NATO's two strategic military commands.

The Church of the Resurrection, Bucharest, has a website here.
Posted by David Hamid at 23:41
Email ThisBlogThis!Share to TwitterShare to FacebookShare to Pinterest