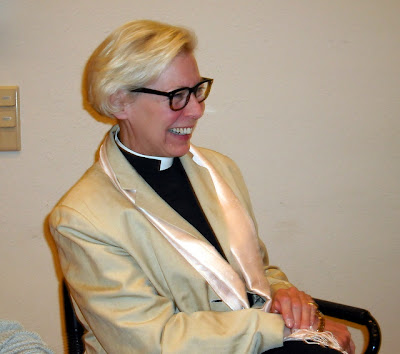 At the Diocesan Synod final dinner last evening, it was announced that our Director of Training, the Revd Canon Ulla Monberg, has been co-opted onto the Anglican Consultative Council (ACC), for the next 6 years. The Secretary General of the Anglican Communion, the Revd Canon Kenneth Kearon, wrote to Canon Monberg with this exciting news last week.

The ACC is one of the instruments of the Anglican Communion, set up after the 1968 Lambeth Conference, to facilitate the co-operative work of the Churches of the Communion, exchanging information between the provinces and helping to co-ordinate common action. It advises on the organisation and structures of the Communion and seeks to develop common policies with respect to the mission and ecumenical life of the Churches.

The ACC membership includes from one to three persons from each province (the Church of England has three). Canon Monberg has been invited to bring the perspective of European Anglicanism, which gives us a unique voice in the Council for the first time ever. Before, we had to rely on the three Church of England delegates to represent the interests of this rather unusual diocese.

The ACC meets every two or three years. The next meeting, and Canon Monberg's first, will be in Aukland, New Zealand, in October.

We wish Canon Monberg every blessing as she takes up this additional responsibility. We are very proud that our diocese can be represented by her in this international forum.

For more information on the Anglican Consultative Council, check the official website here.

Posted by David Hamid at 11:45
Email ThisBlogThis!Share to TwitterShare to FacebookShare to Pinterest