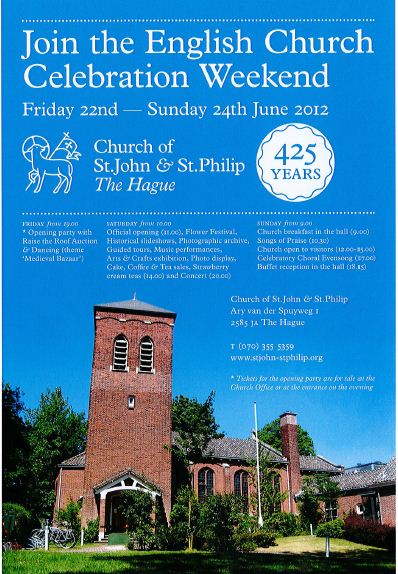 The English Church of St John and St Philip in the Hague can trace its history back to 1586. Churchwarden Tony May has written to me to point out some features of the interesting history of this parish:

In 1584, during the early years of the revolt against King Philip of Spain, Prince William the Silent was assassinated. The Dutch begged Queen Elizabeth I of England to become their sovereign and to provide military aid. Reluctant to get too involved, she nonetheless promised to send soldiers, and appointed the Earl of Leicester as Governor General of the Netherlands. The English Church in The Hague was established in 1586 when the magistrates of the city built a chapel in Noordeinde for the use of chaplains accompanying the English soldiers, diplomats and merchants who came over with the Earl. The English (now Anglican) Church in The Hague has occupied four buildings on different sites and the present building was consecrated in 1952. But the bell that calls the faithful to worship on Sunday is the original bell from the first church building!

Although 2011 marked 425 years since the founding of the congregation, planning to mark this event could not proceed last year, and it was decided to make this year, 2012 the focus for the anniversary. A celebration weekend will be from 22 to 24 June. As part of the weekend, there will be a Festival Evensong 'Through the Ages' on Sunday 24th, when music from the 16th to 21st centuries will be featured.

Posted by David Hamid at 03:00
Email ThisBlogThis!Share to TwitterShare to FacebookShare to Pinterest