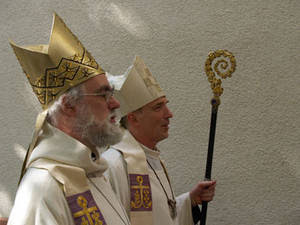 I attach below the Communiqué from the recent meeting of the Anglican-Old Catholic Coordinating Council.

The Anglican-Old Catholic International Co-ordinating Council (AOCICC) met in the International Study Centre, Canterbury, England, from 26 to 29 October 2009. The Council welcomed the Revd Carola von Wrangel from the Convocation of Episcopal Churches in Europe as a new member.

The members received reports of developments in each Communion and reviewed present ecumenical dialogues in which our Communions are engaged. The Council studied several papers on the theology of blessing. It also discussed and adopted an information leaflet about the Old Catholic Churches of the Union of Utrecht.

A draft text for a common statement on ecclesiology and mission was discussed. The Council will present it to the Anglican and Old Catholic Bishops’ Conference and recommends that it be made the theme of the forthcoming International Old Catholic and Anglican Theological Conference in 2011.
Attention was given to the recently published document “Kirche und Kirchengemeinschaft” (Church and Communion) of the International Roman Catholic-Old Catholic Dialogue Commission (IRAD), as well as to the recent Vatican announcement of the Apostolic Constitution to provide personal ordinariates for Anglicans and former Anglicans.

The Council participated in daily Morning Prayer, Evening Prayer and the Eucharist in the Cathedral. The Bible Studies each morning were led by members of the Council. The Council was present at the consecration of the Bishop of Shrewsbury (Diocese of Lichfield) by the Archbishop of Canterbury in Westminster Abbey. Old Catholic bishops Joachim Vobbe and Harald Rein joined with the College of Anglican bishops in the laying on of hands.

At a dinner hosted by the Dean of Canterbury he welcomed members of the Council and led them on a candle-lit pilgrimage in the Cathedral.

The next meeting of the Council will take place 8-12 November 2010 in Germany.

Bishop Harold Rein extended an invitation to the 30th International Old Catholic Congress, to be held 9-13 August 2010 in Zurich.

The members of the Anglican-Old Catholic International Co-ordinating Council are:

Administrative Support and Interpreter: The Revd Lars Simpson
Posted by David Hamid at 09:00
Email ThisBlogThis!Share to TwitterShare to FacebookShare to Pinterest