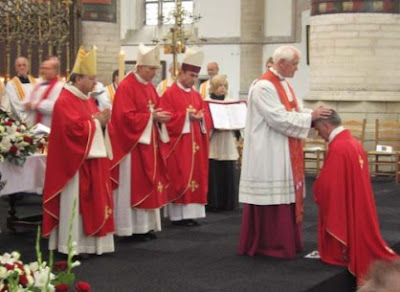 From 26 to 30 October the Anglican-Old Catholic International Co-ordination Council (AOCICC) met in Canterbury. I have been part of this Council since its inception in 1998, first as co-secretary, and latterly as a member. The AOCICC is the instrument which oversees the relationship of full communion between the Churches of the Old Catholic Union of Utrecht and the Anglican Communion, a relationship established by the Bonn Agreement in 1931. Besides keeping each other abreast of issues and trends in our respective Communions, the AOCICC is engaged in ongoing theological work and is close to finalising a joint statement on ecclesiology and mission.
There are two streams of which come together into the Old Catholic Communion:
Given this history, you can imagine there was some interesting conversation at the AOCICC meeting about the recent Vatican announcement of an Apostolic Constitution to bring former Anglicans into the Roman Catholic Church!
The Old Catholic Communion has an official website here. The above picture was taken last year at the consecration of the Old Catholic Bishop of Haarlem, the Rt Revd Dick Schoon.
Posted by David Hamid at 23:50
Email ThisBlogThis!Share to TwitterShare to FacebookShare to Pinterest