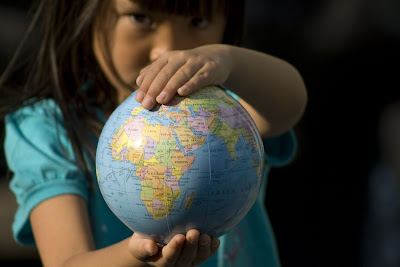 On 29 October, the Archbishop of Canterbury hosted a meeting of faith communities to raise awareness of the effects of catastrophic climate change on the world's poor, as part of the preparations for the upcoming Copenhagen Climate Change Summit. Participants came from Christian, Jewish, Muslim, Hindu, Sikh, Buddhist, Bahá'í, Jain and Zoroastrian faiths. I share the statement below for the prayerful attention of the people of the Diocese in Europe.

As leaders and representatives of faith communities and faith-based organisations in the UK we wish to highlight the very real threat to the world's poor, and to our fragile creation, from the threat of catastrophic climate change. The developed world is primarily responsible for the already visible effects of global heating. Justice requires that we now take responsibility for slowing the rise in global temperature. We call upon UK negotiators at Copenhagen, and the other nations of the G20 in particular, to fight for a deal which speedily
ends unsustainable reliance on fossil fuels and puts in place urgent measures to reduce greenhouse gas emissions so that global temperature rise may be kept within two degrees centigrade.

We recognise unequivocally that there is a moral imperative to tackle the causes of global warming. This is reinforced by the reality that it is the poor and vulnerable who are most profoundly affected by the environmental impact of climate change - especially drought, floods, water shortages and rise in sea levels. Faith communities have a crucial role to play in pressing for changes in behaviour at every level of society and in every economic sector. We all have a responsibility to learn how to live and develop sustainably in a world of finite resources.

This responsibility comes into sharp focus today with less than 40 days before representatives of governments from across the world meet to agree a deal on climate change.

Building on the examples of local and international action to live and to work together sustainably which have been highlighted in our meeting today we pledge to:

· Reach out to our communities, both in the UK and internationally, in the coming weeks to raise awareness of the real potential for catastrophic climate change and to increase public support for an ambitious, fair and effective deal at Copenhagen;

· Continue to share best practice and redouble our efforts to reduce emissions that result from our institutional and individual activities;

· Work with our partners, our sister churches and communities internationally to mitigate the effects of climate change on the poorest and most vulnerable communities in the developing world; and to press governments to support that effort.

To help to achieve these ends we agree to use today's meeting as the first step in an ongoing process of collaboration. We believe our communities can be key agents of change and urge the Government wherever possible to support our efforts to build capacity and commitment to reduce carbon emissions, raise awareness and promote sustainable practice.
Posted by David Hamid at 20:25
Email ThisBlogThis!Share to TwitterShare to FacebookShare to Pinterest