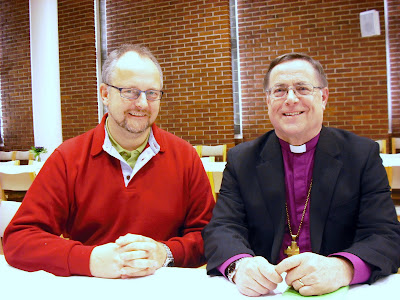 The Archbishop of Turku, the Most Revd Jukka Parma, (pictured above right with Archdeacon-desginate the Revd Jonathan LLoyd) welcomed the synod of the Nordic and Baltic Deanery to his city. "Identity and Change" was the theme explored by the Deanery representatives, at the meeting hosted by the Anglican Church in Finland congregation in Turku from 30 October to 1 November, and chaired by Area Dean Nick Howe.
The Revd Dr Mika Pajunen, Assistant Priest in the Anglican Church in Finland, (who is also a priest of the Finnish Church), gave a keynote address on the history of the Church in his country, beginning with 1917 when Anglicans fled from St Petersburg during the Bolshevik Revolution, founding the congregation of St Nicholas in Helsinki. Fr Mika opened up some themes related to life within the Porvoo Communion of Churches. He challenged us to consider whether we still operate as cultural and denominational ghettos, or whether Anglicans and Lutherans in the Nordic and Baltic countries are moving towards wider structures of inclusion and common life. The Porvoo Common Statement signed by 6 Nordic/Baltic Lutheran Churches and 4 Anglican Churches from the Britain and Ireland brings the signatory Churches into a relationship of visible communion. According to Fr Mika, the Porvoo Agreement should be understood as a creative tool for joint mission.
Fr John Gribben CR, a monk of the Community of the Resurrection, gave three spiritual addresses to the synod delegates. The worship was rich and varied: Anglican evensong sung in the ancient Turku Cathedral;  the synod Eucharist on the feast of Martin Luther, at which 2 candidates were confirmed; and an All Saints Eucharist in the 13th century parish church of St Mary, according to the rite of the Church of Finland, and at which I was the guest preacher.
Over 50 members of the "White Nile" congregations of Sudanese, joined part of the synod, and enlivened the worship with drums and dance. They were a visible sign of the diversity of our diaspora diocese! 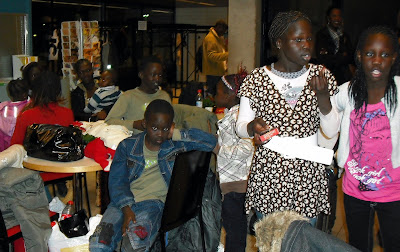 Posted by David Hamid at 16:58
Email ThisBlogThis!Share to TwitterShare to FacebookShare to Pinterest