Ring Your Bells on 13 December 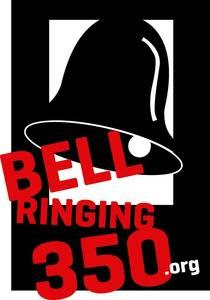 Christians across Europe and around the world are joining in a symbolic action on Sunday 13 December. On that Sunday, midway through the UN summit on climate change in Copenhagen, at 1500 hours (3 pm ) local time churches are invited to ring their bells (or sound their drums or any other instruments they use) 350 times. (350 parts per million is the safe upper limit for carbon dioxide in the atmosphere, according to current scientific estimates).

Also on 13 December, participants at the UN conference have been invited to pray alongside the Danish Queen and church leaders from around the world in an ecumenical celebration at Copenhagen's Lutheran Cathedral. Archbishop Rowan Williams will be the preacher. The service will be broadcast live on Danish television and on the website of the Danish Broadcasting Corporation. You are invited to join in these prayers in your own way, uniting with Christians around the world in supporting those who are to make decisions in Copenhagen, which will affect our lives and the life of our planet.

The Revd Jonathan LLoyd, the chaplain of our parish of St Alban's Copenhagen, is bringing together a team of Franciscan brothers and sisters who will be a praying presence at St Alban's throughout the days of the summit. I will be privileged to be in Copenhagen as part of the Archbishop of Canterbury's suite.

A joint letter to European Christians from the Conference of European Churches and the (Roman Catholic) Council of European Bishops' Conferences, promoting this initiative, can be found here. An announcement with more information can also be found on our diocesan website.
Posted by David Hamid at 18:31
Email ThisBlogThis!Share to TwitterShare to FacebookShare to Pinterest