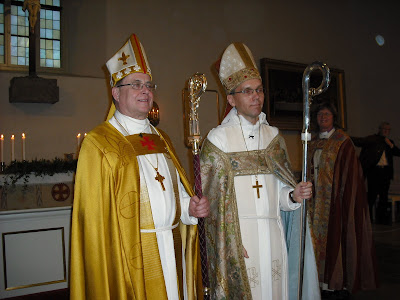 Björn Vikström was consecrated Bishop of Porvoo in the Evangelical Lutheran Church of Finland on Sunday 29 November. (He is on the right in the picture, with the Archbishop of Turku, Jukka Paarma, on the left). Porvoo is the diocese for Swedish-speaking parishes throughout Finland. The Archbishop of Turku presided in Swedish at the service in Porvoo Cathedral, which included portions of scripture read in Danish, Finnish, Norwegian and English. I was invited to be a co-consecator along with bishops from Finland, Sweden, Denmark and Norway. The chaplain of the Anglican Church in Finland, the Revd Rupert Moreton, was also an invited guest.

Bishop Vikström, 46, comes from an academic career, formerly a researcher at Åbo Akademi, the Swedish-language University of Turku. His subjects include sustainable development and environmental ethics, a useful field given the challenges before us. He was ordained priest in 1988.

The Vikström family is well known in Porvoo. Bishop Björn's father, John Vikström, was a previous Bishop of Porvoo from 1970 to 1982 when he was elected Archbishop of Turku and Finland. He was succeeded by his brother Erik Vikström (Björn's uncle) who was Bishop of Porvoo 1983 to 2006.

Porvoo Cathedral has a unique place in Finnish history. In this ancient building exactly 200 years ago this year, Tsar Alexander I assembled the four Estates of Finland (nobles, clergy, burghers and peasants) who pledged allegience to him as the Grand Duke of Finland, ending 700 years of Swedish rule in the country. Alexander ratified the continuance of the Finnish Lutheran Church as well as the basic laws of the land. This was a key event in Finland's national development.

We pray God's blessings on Bishop Björn as he takes up his new responsibilities. 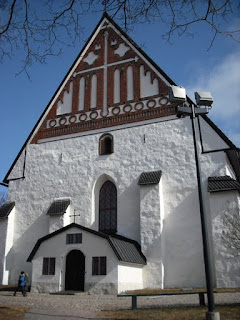 Posted by David Hamid at 14:47
Email ThisBlogThis!Share to TwitterShare to FacebookShare to Pinterest