Anglicans in Nordic / Baltic Area and the Apostolic Constitution 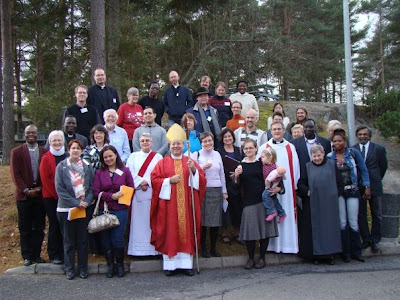 At the meeting of the Nordic / Baltic Deanery of the Diocese in Europe which was held from 30 October to 1 November in Turku, Finland, clergy and laity from 15 congregations in the region discussed the recent announcement from Rome of an Apostolic Constitution to incorporate former Anglicans into the Roman Catholic Church. The synod felt moved to make a clear public statement about their own firm identity as Anglicans, partly to respond to questions they are receiving from ecumenical partners, and partly to indicate their support for the Archbishop of Canterbury, Rowan Williams. The resolution is as follows:

In view of the Vatican's announcement of an Apostolic Constitution for Anglicans and former Anglicans, we, the Nordic and Baltic Deanery Synod of the Church of England affirm:

c) our communion with the Archbishop of Canterbury
Posted by David Hamid at 17:26
Email ThisBlogThis!Share to TwitterShare to FacebookShare to Pinterest