On 26 June, the Revd Canon Giles Williams was licensed by Archdeacon Ken Letts as the new chaplain of Holy Trinity, Cannes. He comes to our diocese from St John the Baptist, Woking, in the Diocese of Guildford, where he has been vicar since 1995.

Canon Williams has also spent 10 years as a missionary in Rwanda where he was the coordinator of an ecumenical Bible translation project with the United Bible Societies. The Bible in Kinyarwanda, very much the fruit of Canon Williams' work, was eventually published in 2005.

Holy Trinity is a congregation is made up of people from many nationalities and ages who live full time or part-time in this famous Riviera resort. The original Church was built towards the end of the nineteenth century. The present building dates from 1973. There is also a Reader in Holy Trinity, Mr David Sinclair. The parish website is here.

In the picture below, Archdeacon Letts reads the bishop's licence to Canon Williams.

We welcome Giles and his wife Christine (they have three grown sons), to the Diocese in Europe. 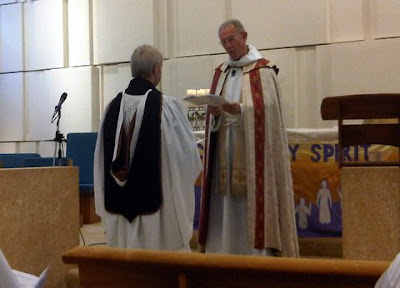 Posted by David Hamid at 22:49
Email ThisBlogThis!Share to TwitterShare to FacebookShare to Pinterest