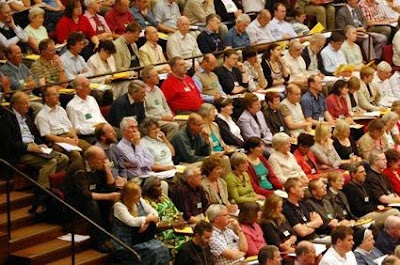 I have already posted an article about the Church of England General Synod's recent work on women bishops. The meeting in York from 9 to 13 July did cover some other matters as well! Here is a short digest:

Clergy Terms of Service
As part of new legislation introducing "common tenure" for clergy in 2011, provisions for maternity, paternity, and adoption leave were made.The new common tenure legislation will only be applied by analogy in the Diocese in Europe as the employment status of our clergy is different from England and varies in almost every country we serve.

Liturgical business
Final approval was given to an Additional Weekday Lectionary. This provides "stand alone" Bible readings that are especially suitable in length and content for services at which occasional worshippers are present – for example, choral evensong in cathedrals.

Two other anti-slavery campaigners, Olaudah Equiano and Thomas Clarkson, are to be celebrated with William Wilberforce on 30 July.

Clergy Pensions
Synod agreed in February 2010 to make certain changes to the clergy pensions scheme, including increasing the pension age from 65 to 68 and increasing the accrual period for future service from 40 to 41.5 years. Also the Scheme is to be contracted into the State Second Pension Scheme (S2P.) The full pension from the Clergy Scheme jn consequence will be reduced from two-thirds of National Minimum Stipend (NMS) to half of NMS for future service. The understanding is that members would thereby earn a smaller scheme pension but a higher state pension for future service, resulting in a broadly neutral effect on total pension entitlement from all sources. Clergy in the scheme in our Diocese in Europe cannot contract into the S2P. Senior Staff are preparing some guidance for our clergy and congregations so that a similar broadly neutral effect on total pension can be maintained.

Fresh Expressions
Synod carried a motion requesting the Archbishops’ Council to identify sources of funding for the production of an online library of resources.

Structures
The Synod agreed to the formation of a new Faith and Order Commission, to carry on the functions of the Faith and Order Advisory Group, the House of Bishops Theological Group and the Doctrine Commission.

Background papers for each debate, alongside links to an audio archive of each session, are available at: http://www.cofe.anglican.org/about/gensynod/agendas/july2010/
Posted by David Hamid at 20:31
Email ThisBlogThis!Share to TwitterShare to FacebookShare to Pinterest