Proposal for Women Bishops Moves to the Next Stage 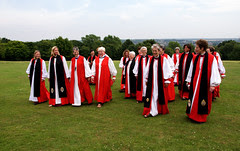 Image by scottgunn via Flickr
After close to 12 hours of debate, on Monday, the draft measure to permit the ordination of women as bishops was approved by the General Synod. It was passed by a sizable majority: 373 in favour; 14 against, 17 abstentions. Earlier in the debate an amendment put forward by the Archbishops of Canterbury and York which would have strengthened provision for those who cannot in conscience accept the ministry of a woman bishop was narrowly defeated, by 5 votes in the house of clergy. Archbishop Rowan remarked that the voting shows the synod is committed to seeing women as bishops while it is also profoundly committed to a "maximum generosity" towards those who cannot in conscience accept this development.

The decision taken on Monday leads to the next step in the process: the draft measure is now to be sent to dioceses for discussion and approval by diocesan synods. The Archbishop of Canterbury remarked that this next stage of consideration in dioceses is not only part of a mechanical legislative task but a process of discernment as well, given that there is depth of feeling on all sides of this issue in the Church of England. The proposed legislation will therefore be a major item on the agenda of our own diocesan synod at its next sessions from 30 May to 3 June 2011.

If the majority of the 44 diocesan synods give their approval, the draft legislation returns to the General Synod in 2012 for any further drafting and final approval, which would require 2/3 majority in each of the three houses of laity, clergy and bishops, voting separately. If passed, the legislation then moves to parliament and must eventually obtain Royal Assent.
Posted by David Hamid at 00:46
Email ThisBlogThis!Share to TwitterShare to FacebookShare to Pinterest