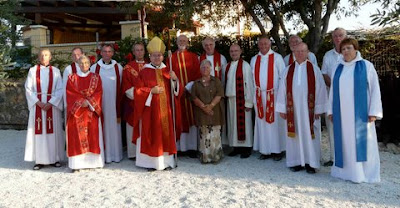 Some further pictures have been sent from Crete, so it is appropriate to mention a further word about the other ordinand, the Revd Tony Lane, who was ordained to the priesthood on 3 July. (I mentioned in a previous post that Fr Tuomas Mäkipää, Assistant Curate in St Nicholas's Helsinki was ordained at the same service).

Priests from Greece, Crete, Turkey, Finland, Austria and the UK participated in the laying on of hands at the ordination, at which the Revd Canon Malcolm Bradshaw was the preacher. The Revd Frances Hiller was the deacon for the celebration and Mrs Christine Saccali, a reader from Athens was my chaplain.

St Thomas's Church was built by Fr Tony and serves the growing Anglican community in Crete. It comprises a smaller building in traditional Cretan style, and an open-air space for worship which incorporates an old grain threshing floor. While Fr Tony continues to serve the congregation as an Assistant Curate in the Greater Athens Chaplaincy, St Thomas's has now grown to the extent that plans are now being made to appoint a resident priest-in-charge. This growth and development is a credit to Fr Tony's pioneering work and pastoral vision.

In the photo below is (a slightly sunburnt) Fr Tuomas (left) with Fr Tony (right). 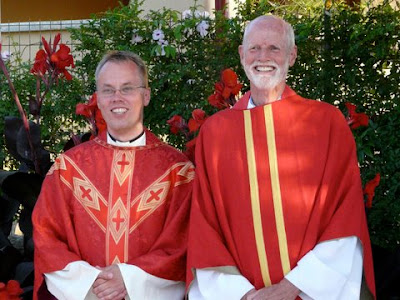 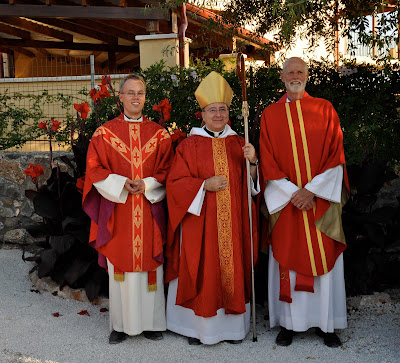 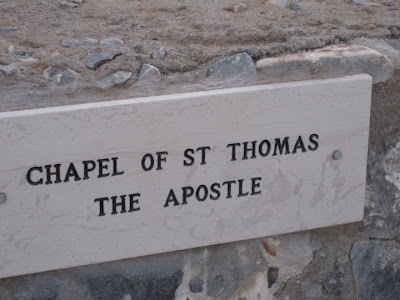 The website of St Thomas's Church Kefalas is here.
Posted by David Hamid at 11:46
Email ThisBlogThis!Share to TwitterShare to FacebookShare to Pinterest