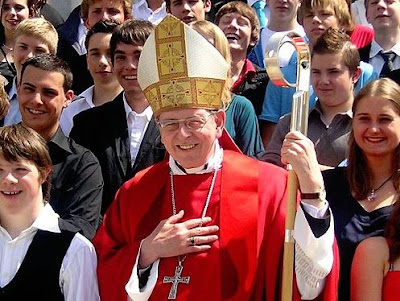 Photo: Ch-info.ch
The Vatican has announced that Bishop Kurt Koch of Basel will be the new President of the Pontifical Council for Promoting Christian Unity (PCPCU). Bishop Koch succeeds Cardinal Walter Kasper, who retired on 1 July. Bishop Koch, aged 60, was also the head of the Swiss (RC) Episcopal Conference. Upon his appointment to the PCPCU he becomes an archbishop.

I have not yet met Archbishop Koch so am not aware of his experience or knowledge of the Anglican Communion. However, my Old Catholic colleagues in Switzerland tell me that he is an excellent theologian and ecumenist. The General Secretary of the World Council of Churches, the Revd Dr Olav Fykse, has spoken of Archbishop Koch’s “openness and deep ecumenical commitment”.  He has served on as a member of the International Mixed Commission for Theological Dialogue Between the Catholic Church and the Orthodox Church. He has also served on the International Catholic-Lutheran Commission for Unity, so it may be that I might meet him at the Assembly of the Lutheran World Federation next week, where I will be one of the Anglican Communion's representatives.
Posted by David Hamid at 14:32
Email ThisBlogThis!Share to TwitterShare to FacebookShare to Pinterest