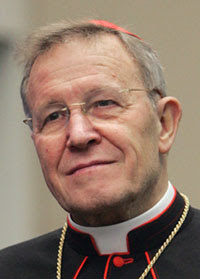 The Vatican announced last Friday 25th of June that Cardinal Walter Kasper, the President of the Pontifical Council for Promoting Christian Unity (PCPCU), would retire on 1 July. Cardinal Kasper has served more than 10 years as the head of this Vatican department during which time he has been a close friend of Anglicans.

The Cardinal is now 77. He was appointed to the PCPCU as Secretary in 1999 from being bishop of the German diocese of Rottenburg-Stuttgart. In 2000 he was made a cardinal and promoted to being the the Council's President.

Cardinal Kasper, although himself a noted theologian and former professor, always emphasised that ecumenism is not simply "done at the desk" as an academic exercise. "Dialogue is life, Dialogue is an integral part of the life of the Church". Thus he was a strong supporter of our theological dialogue, ARCIC, but was also instrumental in the establishment of the International Anglican Roman Catholic Commission on Mission and Unity, (IARCCUM) which is charged with promoting an ecumenism in joint witness, cooperation and life. I had the great privilege of working with him on both Commissions. While he has maintained that the goal of ecumenical dialogue is "full visible communion in faith, sacramental life, apostolic ministry and mission" he also stressed that the goal of unity does not mean uniformity, "but exists alongside cultural diversity, different liturgical rites, different forms of piety, different but complementary emphases and perspectives".

I remember a moving speech he gave at the last Lambeth Conference in which he raised our spirits reminding us to look beyond internal matters:


"But it is important that we not spend all our energy and resources worried only about Church problems. Perhaps we can all have the tendency of looking too much at our navels; in German we have a good word for this: Nabelschau. But our Christian model is not one who sits still, but Abraham, who was called to set out for a foreign land, to forge ahead in obedience to God. We too have been called to look outwards to the world, a world which is in much turmoil and which needs us Christians. It needs us not because we are better than others, but because in St Paul's words, we carry within us a treasure, which is Christ himself, crucified and risen, dwelling in our mortal bodies, in the Church. We carry within us a message of hope, a hope which the world desperately needs, and which is in short supply".

Speaking of his retirement, Cardinal Kasper said, "On one hand, at 77 to be retired is something altogether normal, in fact a liberation. On the other hand, however, I leave a work that I have done with enthusiasm." Anglicans in this diocese wish him every blessing in retirement.

Cardinal Kasper's successor has just been announced: Bishop Kurt Koch, presently the Bishop of Basel in Switzerland.
Posted by David Hamid at 08:00
Email ThisBlogThis!Share to TwitterShare to FacebookShare to Pinterest