Archbishop of Canterbury at the Lutheran World Federation 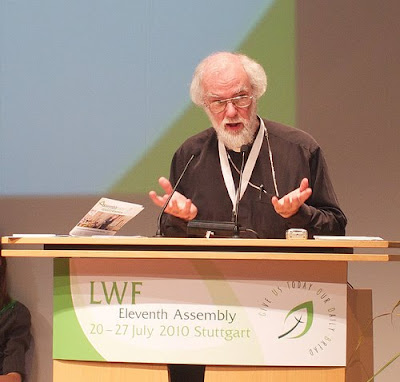 Photo courtesy of Árni Svanur
On 22 July the Archbishop of Canterbury delivered the keynote address at the Assembly of the Lutheran World Federation in Stuttgart, Germany. He reflected on the Assembly's theme Give Us Today Our Daily Bread and explored a number of interpretations of this line from the Lord's Prayer:

"The bread that is shared among Christians is not only material resource, but the recognition of dignity…and to recognise human dignity in one another is indeed to share the truth of what humanity is in the eyes of God.  We feed each other by honouring the truth of the divine image in each other.”


"the exchange of the bread of life and the bread of truth; it is the way in which those who have damaged each other’s humanity and denied its dignity are brought back into a relation where each feeds the other and nurtures their dignity".

The Archbishop reflecting on the Eucharist, said:

"The Lord's Supper is bread for the world – not simply in virtue of the sacramental bread that is literally shared and consumed, but because it is the sign of a humanity set free for mutual gift and service. The Church's mission in God's world is inseparably bound up with the reality of the common life around Christ's table, the life of what a great Anglican scholar called homo eucharisticus, the new 'species' of humanity that is created and sustained by the Eucharistic gathering and its food and drink. Here is proclaimed the possibility of reconciled life and the imperative of living so as to nourish the humanity of others. There is no transforming Eucharistic life if it is not fleshed out in justice and generosity, no proper veneration for the sacramental Body and Blood that is not correspondingly fleshed out in veneration for the neighbour"..

After the address, the Archbishop answered questions from the assembly on a number of topics, including:

The Lutherans were deeply moved by the spiritual teaching of our Archbishop and the President of the Lutheran World Federation, Bishop Mark Hanson (below) spoke very warmly of Archbishop Rowan's leadership. It made me very proud of our Anglican Primate.

The full text of the Archbishop's address can be found here. 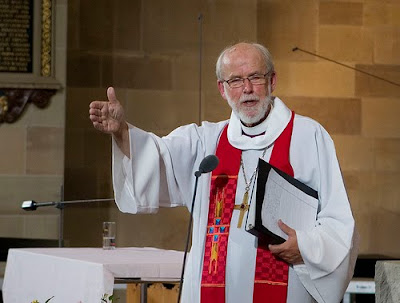 Posted by David Hamid at 16:57
Email ThisBlogThis!Share to TwitterShare to FacebookShare to Pinterest