Come and Meet! The Church in Gran Canaria goes to the people 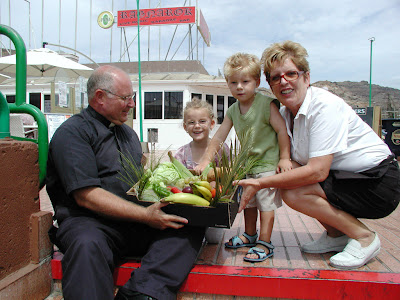 Come and Meet! is part of the outreach initiative led by the Revd Peter Ford OGS, the priest-in-charge of Holy Trinity, Las Palmas de Gran Canaria. Historically worship and Anglican community life has centred on the beautiful Holy Trinity Church which opened for worship in 1892. At that time the congregation was part of the diocese of Sierra Leone! It came under the jurisdiction of the Church of England in 1968. Holy Trinity Church is now recognised as an historic monument by the Government of the Canary Islands.

In the past 30 years tourist resorts have developed in the south of the island, over an hour away from Las Palmas by bus. Fr Peter, with the help of one or two lay volunteers, is extending the presence of the Church in two places in the south, Playa del Ingles, and Puerto Rico. The outreach programme includes:
Doing his weekly rounds in his "dog collar" in this largely unchurched area of mass tourism, Fr Peter encounters many who have come for sunshine and beaches, but who are desperate for deeper human contact and spiritual fulfilment. His ministry extends to befriending and caring for the many bar owners, restauranteurs and others who work in the frantic life of the tourist industry. It is pioneering and demanding work.

I believe that Gran Canaris is the southernmost parish in the Diocese in Europe, (although Tenerife South might claim this also). Fr Peter has been working on a new website for Gran Canaria which can be found here.
Posted by David Hamid at 23:57
Email ThisBlogThis!Share to TwitterShare to FacebookShare to Pinterest