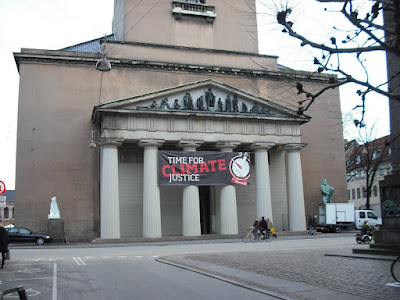 On Sunday afternoon in Copenhagen's Lutheran Cathedral (dedicated to Our Lady) an ecumenical service for creation was held. Queen  Margrethe II of Denmark attended along with the Danish Prime Minister and government ministers and officials from several countries. Among the ecumenical guests were the General Secretary of the World Council of Churches, Sam Kobia, and his successor the Olav Fykse Tveit, as well as dozens of bishops and ecumenical leaders from around the world. Archbishop Desmond Tutu read the opening Psalm136 and gave the final blessing (in Xhosa). Prayers were said with focal images of coral from the Pacific Ocean, maize from Africa and uncovered glacier stone fron Greenland. Songs were sung in English, Zulu, Danish and Greenlandic.

The Archbishop of Canterbury was the preacher. His sermon on the text "perfect love casts out fear" drew applause from the Cathedral, packed with over 1000 worshippers. Outside in the square several hundred more watched the service on a large screen. The Archbishop challenged the decision makers at the Climate Summit: "There is, in a word, no shortage of excellent excuses for turning away from decisions that will mean real change. But at least let's be honest about where they come from: it is fear. And so long as that dominates our calculations, we are stepping back from love - love for the creation itself, love for one another, and for the generations still unborn". Archbishop Rowan emphasised that we met as people of faith in the context of this critical moment in human history; and not simply gathered to plead or harangue, but to say two simple things to ourselves, our neighbours and our governments.  "First: don't be afraid; how do we show that we love God's creation?...Second: how [do we} learn to trust one another within a world of limited resources. In such a world there can be no trust without justice, without the assurance of knowing that my neighbour is there for me when I face insecurity or risk".

The Cathedral bells began to ring 350 times at the end of the service and candles were lit and held by everyone and carried out into the world symbolising our hope and trust in the Lord, who is Light and Life.
Posted by David Hamid at 23:37
Email ThisBlogThis!Share to TwitterShare to FacebookShare to Pinterest