A day in Copenhagen. 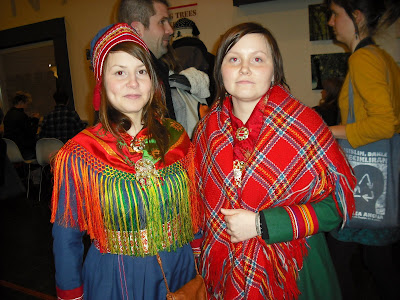 Dateline Copenhagen: I spent a couple of hours today, before Archbishop Rowan arrives, at the Klimaforum09, the "Peoples' Climate Summit", an open space where movements and organisations from all over the world are meeting to discuss and develop grass roots responses to the climate crisis, while the official deliberations go on in another part of the city. There is a fascinating range of over 50 exhibits from vulnerable parts of the world such as the Maldives, to demonstrations of ecologically sound housing to networks of indigenous peoples. Talks, debates and presentations on various topics abound, as well as a range of cultural perfomances - music, drama and film - from around the world. I would guess that the average age of visitors to Klimaforum09 was somewhere in the mid-20s. One of the central outcomes of Klimaforum09 will be a "global climate declaration" expressing the hopes and vision of citizen groups and social movements from every part of the planet. The picture above is of two young women from Swedish Lapland. Like all people living in Sub-Arctic regions, they are already noticing the effects of rapid climate change.
Earlier in the day I presided at the mid-day Eucharist in St Alban's Church, at which Ursula Sonnewald, a parishioner from Trondheim, was confirmed. Ursula and her priest, the Revd Mary Strommen, journeyed down from Western Norway for this service.

The prayer team at St Alban's Church seems to be well into their rhythm of providing hospitality and spiritual nourishment to visitors during the period of COP 15. The team includes 3 Anglican Franscican Brothers and one Sister, as well as other clergy and laity, and is headed by the Chaplain of St Alban's the Revd Jonathan LLoyd. One of the Franciscans remarked that Copenhagen has become a place of pilgrimage: the world is travelling here: politicians, scientists, lobbyists, NGOs, movements and just "ordinary" people. The close of the day included Evening Prayer with about 20 in attendance. The service was followed by a spiritual talk by Brother Clark SSF, the Minister General of the Society of St Francis. Brother Clark has a blog which is worth a visit.

St Alban's, like many Churches and other places around the city, has a focus for prayer and meditation which is very symbolic: rock from Greenland, coral from the Pacific, and corn, the staple crop of many indigenous and other peoples. 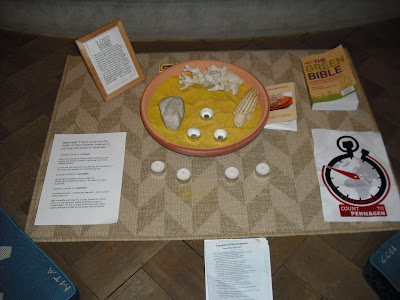 Posted by David Hamid at 23:20
Email ThisBlogThis!Share to TwitterShare to FacebookShare to Pinterest