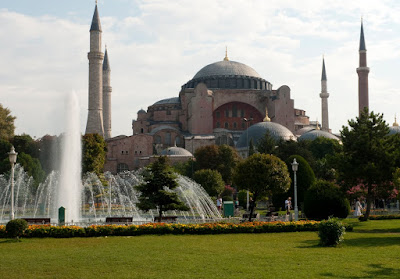 Each year certain cities are designated by the European Union as European Capitals of Culture, to showcase the richness and diversity of European culture and to promote greater mutual knowledge and understanding among the citizens of our continent. In 2010, as well as two EU cities, Essen (Germany) and Pécs (Hungary), a city of a non-EU member country has been designated: Istanbul.

Istanbul is presenting itself as a bridge connecting Europe to the East, an example of the crossroads of civilizations where people have learned to “live differences”. Visitors to Istanbul as European Capital of Culture will want to know of our own Anglican presence in the City which dates from 1583. Church of England services are held at Christ Church, dedicated in 1868 as the Crimean Memorial Church, St Helena’s at the British Consulate General and the (Turkish language) Church of the Resurrection. The chaplain of Christ Church with St Helena's is the Revd Canon Ian Sherwood. The priest-in-charge of the Church of the Resurrection is the Revd Engin Yildirim. For details consult the information on the Diocese in Europe website. The official Istanbul Capital of Culture website is here.

Pécs is promoting its location as a cultural gateway to the Balkans, and is, after Budapest, the second most important artistic community in Hungary. Essen is probably better known for its industrial past rather than a cultural centre. It is embracing this challenge head-on, with an emphasis on “transformation through culture”, showing how what was once the coal pit of Europe is now a dynamic multicultural metropolis. The Diocese in Europe has no congregations in Pécs or Essen.
Posted by David Hamid at 10:36
Email ThisBlogThis!Share to TwitterShare to FacebookShare to Pinterest