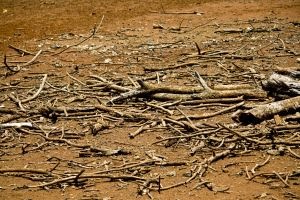 Brian Morgan, the Diocesan Environmental Officer, has written this reflection for the clergy and laity of the diocese, following the disappointment of the UN Climate Change Conference, COP15, in Copenhagen last December.

The eyes of the whole world were focused though out 2009 on the much heralded UN Climate Change Conference COP15 which was held in Copenhagen from the 7th to 18th December. I do not think I exaggerate if I call the final outcome a near disaster for God's creation and mankind. For the world leaders at the table it was not possible to reach a fair, ambitious or binding agreement to arrest the increase in global warming within + 2° C, remembering it is the world's poorest people who are prone to suffer the most. Lust for pride, possessions and power, man's most mournful sins, stood in the way of any chance of a multilateral contract.

Through out the year millions of people all around the globe have been making their fears and anger about global warming known to their leaders and governments by way of rallies, protest marches, protest letters, church services and prayer. Many have adapted their own lifestyles to live more environmentally friendly by way of an example. But clearly it is the governments of the super rich countries of today that are not prepared to see cuts in their industrial production nor provide funds to help the poorer nations face the challenge of climate change.

Does the human race deserve to survive?
How tempting it is to ask this question after the results of COP15. Perhaps those who care about the world in all its beauty and biodiversity and as a dwelling place of future generations were just expecting too much too quickly. Hence the great disappointments and anger! But I believe they - we - were right to expect a binding agreement from COP15 and I can only take solace from the fact that things are perhaps not quite as grim as they may seem. Much has been hopefully learnt by all governments, especially the recognition by rich countries that they can no longer bulldoze the poorer nations into accepting terms which are to their disadvantage. Hopefully there will be more political, social and economic goodwill offered at future meetings. Further conferences are planned for 2010 and this time all eyes will be on COP16 to be held in Mexico City in December. Please continue to protest, rally, write petitions and pray for an international binding agreement on climate change in 2010.

In fact may I recommend that all churches in our Diocese start planning NOW for Creationtide – a Time for God's Creation - as a season in September/October! And may I encourage you to also remember Climate Change in your Lent studies and prayers.


(The Church of England Liturgical Commission has resources available for A Time for God's Creation here)
Posted by David Hamid at 17:12
Email ThisBlogThis!Share to TwitterShare to FacebookShare to Pinterest