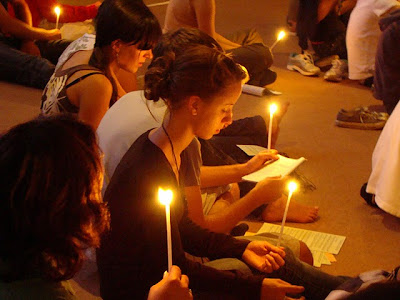 On the 28 December, Brother Alois, the Prior of the Taizé Community sent me a copy of “A Letter from China”. He had just completed a three-week visit to China with two other brothers, one Chinese and another Korean. They were greatly influenced by the testimonies they saw and heard.

A Letter from China contains a deeply spiritual message encouraging us to pay attention to what is already found in the depths of our own being, as a way of listening to God. It makes the point that being filled with a thirst for God should not detach us from the concerns of the world around us. “On the contrary, this thirst leads us to do all we can so that others may enjoy the benefits of creation and find joy in living”.

In the letter there is also a very simple instruction about putting together an ecumenical prayer service in the style of Taizé. This is a useful resource for our congregations, some of which already have regularTaizé services (such as in the Parish of Nerja and Almuñécar). Others may be contemplating adding such a service to their ministry.

The Taizé Community is made up of over a hundred brothers, Catholic, Protestant, Anglican and Orthodox, from around thirty nations. It understands itself to be a “parable of community” that wants its life to be a sign of reconciliation between divided Christians and between separated peoples. Pope John XXIII remarked of the community, "Ah, Taizé, that little springtime".

I encourage you to read the letter which can be found on the Taizé website via this link.
Posted by David Hamid at 22:21
Email ThisBlogThis!Share to TwitterShare to FacebookShare to Pinterest