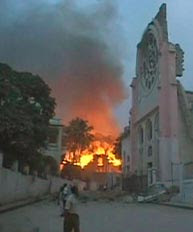 News has come in from some sources in our diocese who have contacts in Haiti. Victoria Hobson, together with her husband the Revd George Hobson, at St Michael's Paris has a long association Haiti. Victoria received this news from an Episcopal Priest friend in Haiti, Fr Kesner Ajax:

Dear Friends in Christ:
We have devastating news to share with you from Haiti in the aftermath of the earthquake yesterday. According to reports I have received here in Les Cayes, the damage in Port au Prince and areas around it is terrible. There is no Cathedral. The entire Holy Trinity complex is gone. The convent for the Sisters of St. Margaret is gone. The Bishop's house is gone. College St. Pierre is gone. The apartment for College St. Pierre is still standing. Bishop no longer has a house in which to live. In Trouin, four people were killed during a service. In Grand Colline, the church is gone. In St Martin of Tours, the kindergarten is gone. In St. Etienne Buteau the church, the rectory and the school are gone. In Les Cayes, Bishop Tharp Institute is OK, but some people were injured trying to get out of the buildings during the quake. The rectory in Les Cayes is in very bad condition.
The Revd Kesner Ajax

I am particularly affected by what has happened in Haiti, and especially to the church in Haiti, as my great-great grandfather, Bishop Alonzo Potter of Pennsylvania, had a role in the ordination of the first Anglican (Episcopal) bishop in Haiti, a black freedman who had been ordained priest to pastor a church for blacks in New Haven, well before the Emancipation Proclamation. I was deeply touched when I learned that this first Haitian Anglican bishop (who met Queen Victoria, preached at Westminster, and attended the second Lambeth conference) had named his first son (later a medical doctor who set up the first medical center in Port-au-Prince) Alonzo Potter Holly, after my forbear. I think I mentioned this to you before. For some reason it moved me to the core....There has also been considerable loss of life on the island, and the whole country must be in deepest mourning, and in need of the consolation of the church, when the church itself is on its knees!

Helena and Samuel Mbele-Mbong's daughter Lisa Anne was killed in the collapse of the human rights section of the building that housed the United Nations Stabilization Mission in Haiti (MINUSTAH) in Port-au-Prince, where she worked as a human rights officer.


Helena is a member of Emmanuel Episcopal Parish in Geneva (part of the Convocation of Episcopal Churches in Europe) and is well known in our own diocese where she has worked together with us on partners in mission and jurisdictional questions. Our prayers are with Helena, Samuel and their grandson Nady, who survived the quake.
Posted by David Hamid at 18:14
Email ThisBlogThis!Share to TwitterShare to FacebookShare to Pinterest