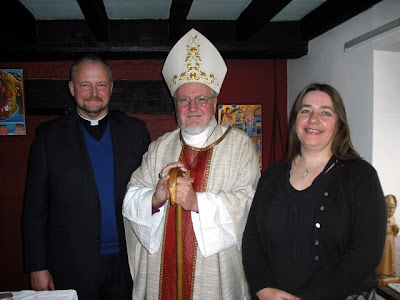 On 20 January during the eucharist at the Bishop's Senior Staff Meeting, the Revd Jonathan LLoyd was collated as Archdeacon of Germany and Northern Europe. Archdeacon LLoyd is also the chaplain of St Alban's Copenhagen.

Among the 7 archdeaconries in the Diocese in Europe, Germany and Northern Europe is the second largest in area, after the Archdeaconry of the East. 23 licensed priests serve over 40 congregations in Germany, Iceland, Norway, Sweden, Finland, Denmark, Lithuania, Latvia and Estonia.

Among the many interesting features in the Archdeaconry include a sort of "joint deanery" in Germany, where the parishes of the [US] Episcopal Church join with our own Church of England congregations in a common council, known as the Council of Anglican-Episcopal Churches in Germany, CAECG. In the northern part of the Archdeaconry the Porvoo Agreement brings us into communion with most of the national Lutheran Churches of the area, and joint work, ministry and cooperation continue to develop and deepen. One of the largest communities in the diocese is in the archdeaconry, known as  the "White Nile Congregations in Finland", who are Sudanese in background and whose worship is from the Book of Common Prayer in Arabic.

Archdeacon LLoyd is assisted by the Area Dean of the Nordic and Baltic States, the Revd Nick Howe, based in Stockholm, and the Area Dean of Germany, the Revd Christopher Jage-Bowler, based in Berlin. As Archdeacon, Fr Jonathan also becomes a member of the Cathedral Chapter, with the named stall of St Henry of Finland, in the Pro-Cathedral of the Holy Trinity in Brussels.
Posted by David Hamid at 23:48
Email ThisBlogThis!Share to TwitterShare to FacebookShare to Pinterest