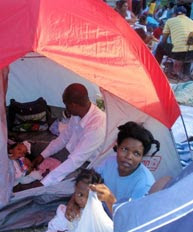 The Revd Philip Mounstephen of St Michael's Paris has forwarded me this report which comes directly from one of his parishioners, Robyn Gason. She is the only worker with the French Red Cross who was invited to go to Haiti with the International Committee of the Red Cross.


Dear All,
Have finally got a moment to write.
Arrived in Port au Prince on Sunday, having attended a briefing in Geneva and then travelled over two days to Haiti via Madrid, Saint Juan and Santo Domingo (Dominican Republic), arriving in late evening.
Most of us are sleeping outside in the garden of the ICRC headquarters with mosquito nets. We had an after-shock today which measured 6.2. It felt like being in a water bed. It was quite scary, but thankfully it wasn't serious and there was no widespread damage.
You cannot believe the suffering here. One of my colleagues who visited the morgue this morning, who has been doing forensic work for 25 years, said she has never seen anything like what she saw today, especially in terms of the total lack of organisation regarding the dead. Most families will not know where their relatives are buried or even be able to confirm whether they have died.
I am currently looking after a centre that is enabling people to make calls to their family members abroad, and also to register themselves as 'safe and well' on a family links website. Their relatives accessing the website abroad will be able to check to see if their family members have survived and where they might be located; they are also able to record the names of those they are looking for . Today I went out into the streets to promote the service and to allow people to make calls on the satellite phone. The people are living in absolute misery, located in camps all over the city. They will probably eventually be relocated to larger camps.
I have 4 volunteers from the Haitian Red Cross working with me. They are all bright and very helpful. All of them are doing fourth-year tertiary studies, but have no idea when, or if, their studies will resume. They tell me that only one percent of the population receive a tertiary education.
Just over the wall from where we are sleeping, groups of people are praising God for most of the night and praying. Most of the Haitians I've spoken to are believing Christians and believe that God's intervention is the only way through.
We get up around 6am and work finishes around 9-10 at night. Long days. Tonight, though, was special. We had a raclette. Food and water are scarce.
The situation is absolutely dire. Can't imagine anything worse, except that the people have faith, and this makes all the difference.
Thank you for your prayers.
Much love,
Robyn

Posted by David Hamid at 14:17
Email ThisBlogThis!Share to TwitterShare to FacebookShare to Pinterest